Electric and fuel-cell vehicle sales in Europe jumped by over 50 per cent in the last quarter of 2019, but still make up only 4.4 per cent of total sales. 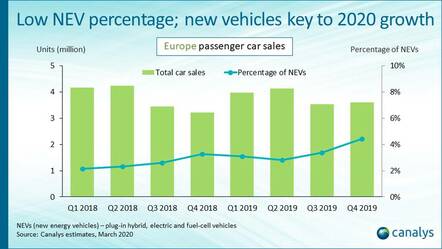 Chris Jones, chief automotive analyst at Canalys, said the industry needed a boost but new, cheaper, compact electric vehicles due in the next few months would help to kick-start the market.

Canalys said demand for new vehicles across Europe was muted. Although sales for the fourth quarter and the year as a whole were up, the picture was muddied because of the negative impact of regulation changes last year. Emissions and fuel-efficiency changes in the Worldwide Harmonised Light-duty Vehicle Test Procedure (WLTP) caused dramatic drops in car and van sales.

Researchers also warned that the impact of coronavirus would inhibit sales well into 2020. They are also seeing an impact from component shortages hitting not just new energy vehicles, but all car manufacturing around the globe.

Such shortages, coupled with weak demand, may encourage manufacturers to focus on and prioritise component supplies for higher-margin vehicles – which are not typically NEVs. ®