It's environmentally friendlier, you see

Something for the Weekend, Sir? If there's something I can't stand, it's those stupid columns people write for IT news websites.

Before they made the move online, columnists used to write their tedious opinions in computer magazines. And it was back then, as a budding sub-editor of the tedious musings of better experienced* and more qualified** journalists than myself, that my distaste of their tiresome blah was fomented.

You wouldn't catch me doing this, I told myself. I have standards.

What has always bugged me about opinion columns is that they so transparently trudge through the same old unsurprising revelations that would come round again and again with clockwork predictability, like seasons used to do before Extinction Rebellion changed them all around.

While reading a column, my mind, dulled by years of underuse or misuse (or perhaps just missing), imagines the writing process employed by the author. These IT influencers must look outside the window and make observations such as these:

And so it comes round again: just sed "a global pandemic" for "snowing" and last winter's column about teleworking is good to go. Predictable as ever, everyone's writing about employers' moral obligation to allow employees to use comms tech so they can work from the comfort of their own self-isolation tanks.

You won't catch me doing this. I have standards.

There was a thread on an online community of freelance tech journalists this week asking whether any members were considering going into self-isolation. This is, of course, a leading question: the career of freelance tech journalism, by definition, is self-isolation. It's like asking World of Warcraft players if they would consider sitting in a dark bedroom for 36 hours with the curtains drawn, and occasionally shouting "No thanks I'm fine Mum."

While it's notable in its inevitability that collaborative apps are making hay at the moment, I wonder if we're ignoring another potential explosion of inventive product development mothered by COVID-19.

I'm talking, of course, about the Tinfoil Hat Industry: the usual crowd of anti-5G protesters, flat-earthers and those interesting individuals who attune themselves with Gaia by keeping a piece of perspex in a little faux-velvet bag in their pocket.

Always one for a laugh, Mme D picked up another of those magical phone gadgets the other week. Here it is. 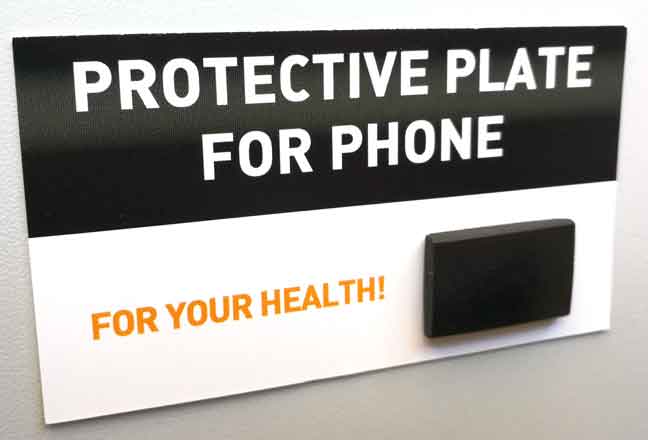 All you have to do is peel it off and apply it directly to the back of your smartphone. The thing is, I use two handsets, for various reasons too dull to recount here. So I've decided the best thing is to apply the plate directly to my forehead.

For the remaining handful of sceptics still doubting the efficacy of this marvellous device, full details about how the plate works can be found on the reverse of the card. 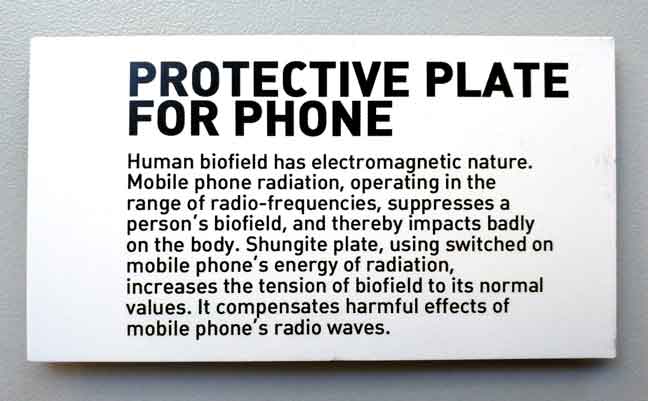 The Shungite Plate cost €10, a bargain I'm sure you agree.

Surely now it's inevitable there will be a growth in COVID-19-related antiviral protection gadgets aimed at the feeble-minded and desperate. Instead of tinfoil, people are already keeping the nasty viruses away by – and I admit I'm guessing a little here – wrapping themselves up in toilet paper.

I must admit, of all the things I'd stock up massively in my self-isolation bunker to sit out the contagion period, toilet paper isn't it. I mean even if you ate Thai curry at every meal for 14 days, you'd still struggle to get through a couple of rolls. And these preppers will be surviving on pasta anyway.

So it's only logical to assume the toilet paper must have some other devious use. Expect to see fresh new lines of soft, strong, very, very long, and certainly super-absorbent clothing on the catwalk this spring. Supermodels? Pah! This year's "look" will be Invisible Man chic, complete with bogroll-wrapped face, sunglasses, smoking hat, tartan slippers and the regimented self-isolating dressing gown.

Weirdly, this means the only thing left to wipe our arses with will be tinfoil.

Ah, no. You won't catch me doing this. I have standards.

Alistair Dabbs is a freelance technology tart, juggling tech journalism, training and digital publishing. Yes, he is aware of the sour irony of criticising opinion columns in IT news websites. It is intentional. There is a gypsy proverb about politics that can be applied to journalists too – [Journalism] is like a pigeon: when it's on the ground it eats from your hand, but when it's flying it shits on your head. @alidabbs

* Some of them certainly looked as if they'd been around the block a bit.

** A degree in Sociology and Applied Hairdressing from Barnsley Polytechnic.