GitHub's mobile app for developers and other team members working on projects in GitHub repositories is now generally available for users of iOS and Android.

The app was announced in November 2019 by Ryan Nystrom, director of engineering, at the Universe event and has been in beta since then, initially for iOS only, but now GA for both platforms.

Coding on a mobile device is largely not a great experience, though web-based IDEs have their place. The GitHub app however is aimed at all the other things developers do, such as raising or commenting on issues, approving pull requests (requests to merge new code), and responding to notifications such as @mentions .

Developers can drill down into pull requests and see the code that has been added or deleted. The app includes syntax highlighting for popular programming languages.

GitHub wrote the app separately for iOS and Android, using Swift for iOS and Kotlin on Google's platform. A native look and feel for each platform was favoured, rather than trying to do a cross-platform user interface or mimicking the GitHub website. In an interview, Nystrom and GitHub designer Brian Lovin explained how they mocked up a design for one platform and had the team on the other platform replicate it with appropriate adjustments. The downside of the approach is that the app works differently from visiting the GitHub website with a mobile browser, meaning more to learn.

The home menu of the GitHub mobile appe

We installed the app on both iOS and Android. Login uses OAuth, which means you are redirected to the web site when logging in, and 2-factor authentication works correctly.

The app has a bottom navigation bar with three options: Home for access to your GitHub issues, pull requests and repositories; Notifications which is in effect your GitHub inbox; and Search as a last resort for finding what you want. We successfully navigated repositories, merged a pull request, created an issue and commented on another issue.

We found it to be genuinely useful, giving convenient access to GitHub from a smartphone or tablet. It only offers a small subset of what is available on GitHub's website though. "GitHub is an old product, there is a lot of stuff on GitHub.com. Which subset of those features feel most coherent to put on a phone?" said Nystrom and Lovin in the interview referenced above.

What do developers think? Ratings are currently higher on Apple's platform (4.9 over 520 ratings) than on Android (4.1 with 395 ratings). "It's good that this has a mobile app now, but it's pretty useless; I can't change branches and can't edit any of my code. UI is also extremely barebones and I would like a sidebar menu to be able to more easily navigate rather than spamming the back button," said a user called Nixinova. They make an excellent point, there is a lot of back-button tapping involved in using this app.

User Sylvan Mably said: "Better hope you don't have a thousand-line diff in your package-lock.json at the beginning of your PR, because you're going to have to manually scroll through pages and pages of noise before you get to any relevant changes. Hopefully this functionality is under active development, because in its current state, the app is only useful for reviewing very small PRs." Another strong observation.

A common complaint is that the app only works with GitHub, and not with custom installations of GitHub Enterprise Server.

There is also plenty of appreciation, with comments like: "Finally! Way smoother than mobile view!" 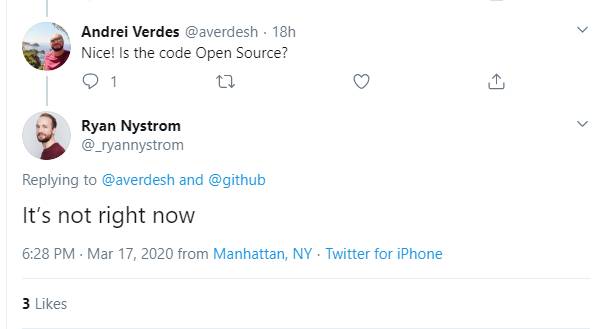 GitHub for mobile is not open source (yet)

It is a good start then, but not yet everything users hoped for. There is one oddity though. At the Universe event, GitHub CEO Nat Friedman stood on stage with a backdrop declaring, "Open source has won." Yet this mobile app is not open source, though Nystrom said on Twitter: "Not right now," implying the possibility of change.

Given the target market, that would seem an obvious route to useful improvements. ®