Börk!Börk!Börk! In these trying times it is good to see Windows occasionally matching the global mood with a sad face in The Register's series of BSODdery. Welcome to Scandi-Bork.

Today's BSOD, from a reader who adopted the suffix "half a Swede", but is sadly not called "Eric" (for all those Monty Python fans out there) comes from the Swedish city of Malmö.

Sweden's third largest city, Malmö is home to all manner of retail delights including the Triangeln mall. 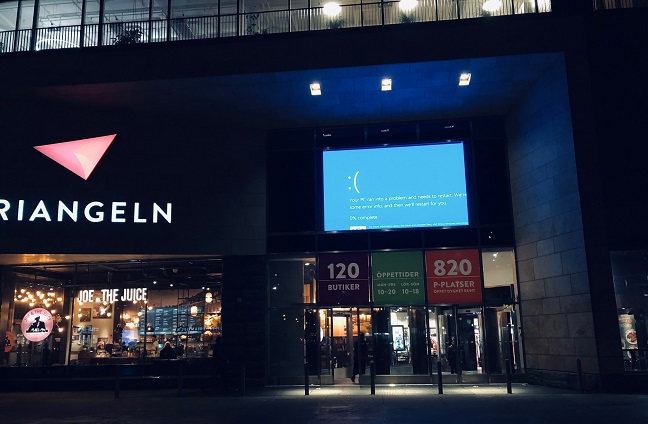 The mall, which at the time of writing remains open for business since the Swedish government's ban on gatherings of more than 500 people does not apparently apply to shopping emporiums, is home to a wide variety of outlets, including BikBok, Bjørg of Scandinavia and the compulsory Flying Tiger.

BSOD beef bork merchants McDonald's are also present, but today's serving is front, centre and hanging over the entrance to the shopping centre itself.

Never has the new BSOD imagery seemed somehow so appropriate. If only one could switch the word "PC" for "World" to complete the effect.

Who knows what will happen when that counter reaches 100 per cent?

There is no word from our reader on how the shoppers reacted to the borkage.

As for the Vultures at El Reg? We'd order in from a Triangeln retailer called Döner Kebab and would hopefully be able to drown our sorrows in delicious steaming mystery meat. Assuming the Swedish grub emporium serves anything like the delights available in our nearby Kebab House.