Vid Scientists may be able to calculate a black hole’s mass and rotation from photographs alone one day, according to research published in Science Advances.

The first-ever snap taken of a black hole, located at the center of galaxy Messier 87, was unveiled by a team of physicists working with the Earth-based Event Horizon Telescope (EHT) array in April last year. It revealed a circular black object surrounded by a blurry, bright orange glow against a dark background. 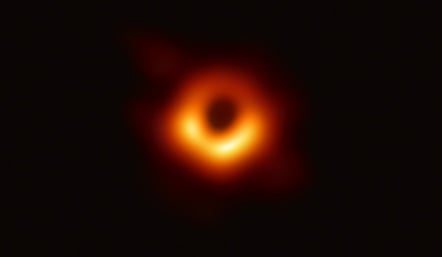 The blurry black hole snapped at the center of Messier 87 ... Click to enlarge

Although it may not appear all that impressive, it’s not a bad photo considering the light-swallowing void, measuring 6.5 million times more massive than the Sun, lies some 55 million light years away from Earth. Now, a group of experts led by the Center for Astrophysics at Harvard & Smithsonian (CfA) in America, believe there’s more to this image than meets the eye.

"The image of a black hole actually contains a nested series of rings," said Michael Johnson, first author of a study into the snap, and a CfA astrophysicist.

"Each successive ring has about the same diameter but becomes increasingly sharper because its light orbited the black hole more times before reaching the observer. With the current EHT image, we've caught just a glimpse of the full complexity that should emerge in the image of any black hole."

The black hole photo broken down into a stack of "increasingly sharp subrings that correspond to the number of orbits that photons took around the black hole before reaching the observer."
Click to enlarge ... Credit: George Wong (UIUC) and Michael Johnson (CfA)

In other words, it turns out the smoldering orange light in the Messier 87 picture is actually made up of layers of so-called photon rings, which are circles of light concentrated by the gravity of the black hole. The size and shape of these rings encode vital information about the hole, allowing its mass and spin to be calculated. Physicists typically glean such information by employing a range of techniques, such as measuring how neighboring stars wobble and orbit the hole.

As a result of this study, in future, they can potentially work out these details from photos of black holes. One benefit of this is that you need just two radio telescopes, far apart, to snap suitable ring photos to work out a black hole's vital statistics, rather than take readings from many instruments. It's also just cool.

Below is a clip from a video by the CfA that illustrates more clearly how one of the black hole photo's rings was formed from photons flowing around the void – see here for the full version.

George Wong, co-author of the paper and a graduate student at the University of Illinois at Urbana-Champaign in the US, built software to simulate these photon rings.

"What started as classic pencil-and-paper calculations prompted us to push our simulations to new limits," he said on Wednesday.

Johnson added: "What really surprised us was that while the nested subrings are almost imperceptible to the naked eye on images – even perfect images – they are strong and clear signals for arrays of telescopes called interferometers. While capturing black hole images normally requires many distributed telescopes, the subrings are perfect to study using only two telescopes that are very far apart. Adding one space telescope to the EHT would be enough." ®