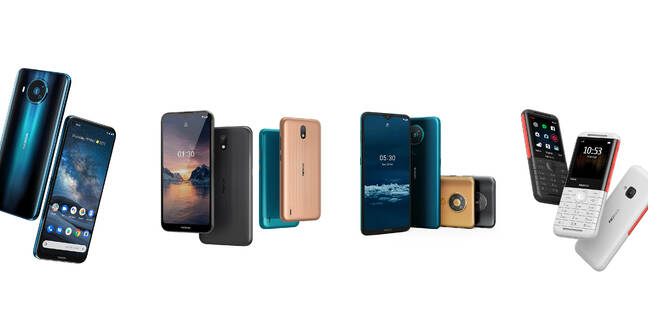 The cancellation of Mobile World Congress might have derailed HMD Global's launch plans, but the Espoo-based licensor of the iconic Nokia marque has nonetheless unveiled three new smartphones. Arguably the most exciting is the Nokia 8.3 5G.

The 8.3 uses Qualcomm's Snapdragon 756G platform, replete with Qualy's RF antenna modules to support as many 5G bands and standards as possible.

The base model packs 6GB of RAM and 64GB of internal storage. Spend a bit more, and you can boost the RAM to 8GB and double the storage to 128GB. There's also a slot for a MicroSD card, which supports volumes up to 400GB in size.

In terms of display, there's a 6.81-inch FHD+ panel with a reasonably wide 20:9 aspect ratio, and a maximum resolution of 1080x2400 pixels. In the top-left of the phone’s display, you’ll spot a 24MP holepunch camera with Zeiss optics and an aperture of f/2.0

Flip it around, and you'll spot a constellation of cameras. The primary sensor is a 64MP affair. This is garnished with a 12MP ultra-wide sensor, which packs surprisingly large 2.8-micron pixels. This should improve low-light performance irrespective of any pixel-binning tech on the primary sensor. To boot, the Nokia 8.3 5G also includes a 2MP depth sensor and a 2MP macro lens.

HMD Global is angling this handset towards budding videographers and YouTubers. The phone offers an "action camera mode," which stabilises recorded footage as the user moves around. There's also various AI tweaks that offer more cinematographically pleasing effects, along the lines of JJ Abrams-style lens flares.

The Nokia 8.3 5G runs Android 10, and as is the case with Nokia's other devices, is part of the Android One program, which promises monthly security updates for three years, and OS updates for two years.

While the Nokia 8.3 5G isn't the priciest phone we've ever seen (not by a long shot), it's worth noting that it's accompanied by two other bowers that sit below €200 and €100 respectively.

The first is the Nokia 5.3, which will retail under €200 when it's released later in April. Unusually for the price, this handset includes a four-camera setup. This includes a 13MP primary sensor, a 5MP ultra-wide-angle, a 2MP macro, and a 2MP depth sensor.

This phone is the first to use Qualcomm's Snapdragon 665 platform. This is accompanied by 3GB of RAM, with pricier variants offering 4GB and 6GB. On the storage front, there's a choice between 64GB and 128GB ROM, which can be augmented with a 512GB microSD card.

At 6.55 inches, the display is fairly big, but it's only HD+, with a resolution of 1600x700. There's also a small teardrop notch, which houses an 8MP front-facing camera. At the bottom you'll spot a USB-C slot, as well as a 3.5mm headphone jack.

Cheaper still is the Nokia 1.3. This runs the slimmed-down Android 10 Go, which is intended for low-power devices. In terms of price-point and functionality, this device serves as a midway point between a feature phone and an entry-level smartphone.

The Nokia 1.3 is powered by the low-power Qualcomm 215 platform and comes with a 5.71-inch HD+ display. Predictably, RAM and storage is in short supply, with 1GB and 16GB found in the base (and only) model.

At the rear of the device is a solitary 8MP shooter. To get the most of this, the phone is bundled with the Google Camera Go app, which comes with a handful of AI tweaks to improve quality. There’s also a low-light mode added by Nokia, which should improve quality in adverse conditions.

You also get a 5MP front-facing camera, which comes housed in a small teardrop notch at the top of the display.

In terms of battery, users get a 3,000mAh cell, which is charged via MicroUSB. In terms of endurance, punters should be able to squeeze 15 hours of talk-time out of the device, with a 28 days on standby.

HMD Global will release the Nokia 1.3 in April at a price-point of €95. As with the other two devices, UK pricing is not currently available. ®

One wonders how the 100k-plus staff are taking it