Thought you'd go online to buy better laptop for home working? Too bad, UK. So did everyone. Laptops, monitors and WLANs fly off shelves 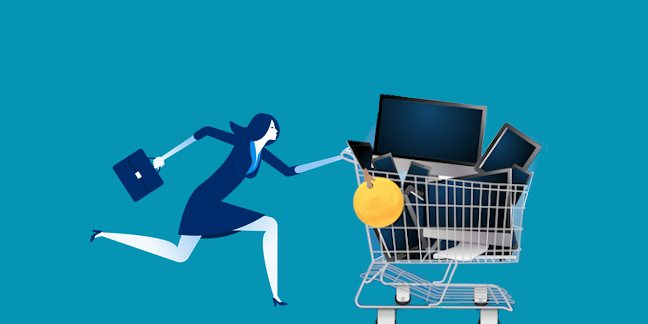 Notebooks are flying off the shelves like hot cakes, or perhaps more appropriately bog paper, as Brits barricade themselves at home to rest, work and play in an effort to avoid catching COVID-19.

Mike Norris, chief exec at Computacenter - one of Europe's largest resellers - told us he has been signing "500, 1,000 or 2,000 laptop deals" with biz customers that are equipping employees for remote working.

"At the moment, people are buying PCs in the same way they are buying loo rolls," he said, in reference to the panic purchasing seen in the UK, US and Australia as concerned citizens consume without caution.

He noted similar spikes in sales of monitors, virtual private network services and wireless LANs. And he said calls to the techies manning its service desks from biz people working in their PJs was up 100 per cent.

"Anything that aids home working is up. I don't know how long that will last," Norris added.

Sadly, at least for resellers like Computacenter, people don't replenish their PCs as often as they buy poop erasers - a point not lost on the CEO.

Resellers facing 'months' of delays for orders to be fulfilled. IT gathers dust on docks as coronavirus-stricken China goes back to work

The flip side of coronavirus is that field service engineers aren't getting much to do because customers don't want people on-site, and if the UK enters a prolonged period of lockdown demand, queries for enterprise kit may "go quiet."

"Customers will stop buying and start preserving capital," he warned.

A senior source at one of the world's largest tech distributors echoed the sentiments about home working, saying "anything related to unified comms, and headsets, as well as screens and notebooks, are flying."

However, cracks are starting to appear in supply with the disruption, claimed our source, who spoke to us on the condition of anonymity: the disruption to manufacturing was caused as factories in China closed around the Chinese New Year or scaled back production.

"When the virus hit, there was more than enough product on the sea [on its way to Europe] but shortages could start to appear in April or May. Demand might decline so we might get over it."

Domestic flights carried a "belly full" of tech kit when in service, but since the travel restrictions tech firms have turned to commercial freight forwarders and prices have gone up fourfold, our source said.

"That cost has to be passed on [by distributors]," he added.

The European shippers council warned of this last month. "We might see some adjustment in prices, but this situation should not lead to some sort of commercial exploitation by certain parties," Roger Spoel, the trade body's policy manager for air freight, reportedly said at the time.

Gurvin Meyer, analyst at Context, said: "We can clearly see an uptake on home working kits in Europe in general, especially in the countries that have been hit first by the coronavirus crisis on headsets (Italy, Switzerland, Austria), which is obviously not unexpected as the working from home is increasingly importantly.

"We hear also important increases of traffic on the use of collaboration software such as Zoom, Hangout, Skype, Webex from vendors."

He said the analyst haus had also seen "significant year-on-year growth for the notebook [segment], especially on the consumer channels (retail chain and E-tail) for the week 7 to week 10 [of calendar '20], which is also being put on the back of the increase of home working due to the crisis."

According to distributor sales data compiled by Context, headset sales in Europe were up 38 per cent year-on-year in the aforementioned 3-week time period, notebook sales were up 15 per cent in overall terms, including a 28 per cent spike in sales to retailers and online resellers. ®

Surge in home working highlights Microsoft licensing issue: If you are not on subscription, working remotely is a premium feature

Tech won't save you from lockdown disaster: How to manage family and free time while working from home

Kerching! Intel PC chip shortage over just in time for everyone to buy computers for pandemic home working