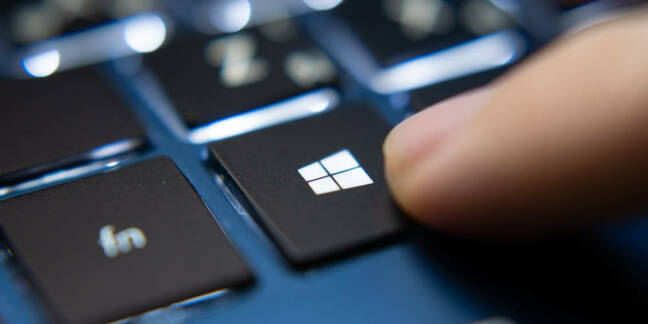 Roundup In a week that saw ups and downs for collaboration platform Teams, Windows 10 cross the magic billion mark and Apple admit that maybe Microsoft was right about the whole Surface thing, the Redmond gang continues its remote toiling.

It's been a while since Dona Sarkar packed her bags and headed off to pastures new, leaving the 18 million Windows Insiders bereft, and enjoying leadership by committee. While senior program manager Brandon LeBlanc has been at the helm of the blog, a figurehead to stick on the prow of the good ship Ninja Cat has been needed.

Very pumped to introduce @amanda_lango as the new lead for the Windows Insider Program. Not only do I truly believe in the power of this program, but I’m also looking forward to working hand in hand with Amanda as we establish a vision for the future. https://t.co/tTerILvN8u

Langowski is a long-time Microsoft insider, having joined the company in 2000. Windows Insider enthusiasts will be delighted to learn that she spent a good portion of her Microsoft career in the world of Windows Phone, before a sideways shuffle into Devices ahead of leading the flighting team responsible for publishing OS updates and picking which flight should go where.

There have been some memorably borked releases of Windows over the years, not least the accidental emission of something that should never have seeped under the bathroom door of the Windows Insider Program back in July 2019. So careful with that Big Red Button, Amanda.

The Windows Insider Program has been in need of a shake-up for a while now, and as well as the appointment of Langowski, Panay has also threatened that he will be working "hand in hand" with the new leader. Insiders will hope that a renewed focus will lead to slightly less dull builds in the future and, whisper it, perhaps something a little 10X-shaped appearing before long.

The problem, or maybe the benefit, of hitching one's wagon to a new codebase is when events result in an "adjusted work schedule", the same schedule should really apply to others.

The Chromium gang announced last week that there would be a hiatus in Chrome and Chrome OS releases, although it clarified later that Dev channels would get updated "in the near future" and Canary builds would carry on as normal.

With Microsoft now firmly in the Chromium camp, principal PM lead for the Microsoft Edge Developer Experience (which sounds like it should be a 1970s prog rock band) Kyle Pflug ruefully confirmed that yup – Edge 81 wasn't going to be going into the Stable channel any time soon, although the Canary, Dev and Beta channels would carry on.

In a nutshell, the advice (which is well worth a read) was to encourage a team culture, keep employees informed, and maintain "well-established rhythms for shipping software". Unless, of course, the Chromium gang hit pause on Stable.

Preview 1 of the next version of Microsoft's open-source functional-first programming language dropped last week requiring because – hey, it's a preview – the likes of the .NET 5 Preview SDK to be installed in order to tinker with it.

Trumpeting better interactive and analytical programming in version 5, the gang kicked things off with a look at ways to better align with "recent investments made to support .NET in Jupyter Notebooks". Indeed, Jupyter Notebooks for .NET hit the preview 2 point last month.

While interactive programming has been a strength of F#, it has been neglected in recent years. As such, a large chunk of version 5 will work on the "overall experience", although the gang has promised that the general purpose aspect of the F# language won't be left by the wayside in the pursuit of all the data science and machine learning goodness.

While it is early days in the preview, the team has been at work enhancing data slicing, starting with tidying up exceptions for slicing the built-in core data types (string, list, arrays and so on). All built-in types now return empty slices when asked to do the impossible rather than some barfing up an exception while others don't.

Fixed-index slices for 3D and 4D arrays also put in an appearance as did reverse indexes and slicing from the end. Not earth-shattering, but certainly convenient.

The team has also introduced a nameof function, aimed at making refactoring names less painful, and added the ability to "open" a static class as if it were a module or namespace.

It's early days and the F# gang acknowledges that some of the changes to slicing at least could be a tad... "controversial" (although this hack, for one, is grateful for the consistency.)

Development continues ahead of an eventual GA later this year. ®