Astroboffins have analysed what happened when the Japanese probe Hayabusa2 shot a 2kg Small Carry-on Impactor (SCI) at asteroid Ryugu in 2019.

Hayabusa2 unloaded the SCI with the intention of creating a crater we could study to figure out what asteroids are made of.

The analysis of the SCI's impact, published in Science, suggests a rather sandy environment. 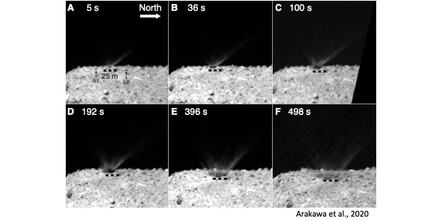 Scientists drew that conclusion despite the SCI making a semi-circular crater, a shape attributed to the presence of a large boulder near the impact site. That rock, named Okamoto, was unmoved by the SCI. Another smaller rock, the five-metre boulder named Iijima, was moved by several metres. The Japan Aerospace Exploration Agency's explainer says: "A small pit was also formed close to the impact site, implying that Ryugu may have a layered structure, with a harder layer containing the pit overlaid with a fluffier surface material."

Fluffiness recurs in the formal paper in which scientists have tried to interpret the patterns of material left behind by the impact – "ejecta" in crater-boffin language.

The SCI appears to have created ejecta but it didn't travel far beyond the rim. But it also created more ejecta than expected and a bigger crater than was predicted.

Which is where things get tricky: the paper's authors have tried to model the behaviour of different materials when whacked by the SCI under Ryugu's low gravity, and then to interpret the materials on the asteroid's surface.

Their conclusion? Ryugu is probably covered in a layer of something rather loosely held together, perhaps rather like sand. And if Ryugu is sandy, its surface material is probably also only about nine million years old, which perhaps coincides with whatever incident caused it to leave the main asteroid belt and settle in its current near-Earth orbit where it's less likely to experience collisions that disturb the sand.

We'll know more soon because later this year the probe will send a sample of Ryugu-stuff to Earth. Assuming there's anyone left to find and analyse the payload. ®