Chocolate Factory's software souk still Trumped, so you'll have to make do with AppGallery

Undeterred by US boycotts, Huawei has pushed out a new range of Android smartphones without the Google software that usually comes with them.

As is the case with the previous entrants in Huawei's P-series, the focus with the new P40 series is unabashedly on photography (pun absolutely intended), with the embattled Chinese tech giant touting new advances in zoom and low-light imaging.

There are three models in the series: the P40, P40 Pro, and the P40 Pro+ – see these links for the full specifications, such as processor and battery.

All use the same fundamental design, with the cameras housed in a small box, strongly resembling the approach taken by the Samsung S20 series. The rear is a scratch-proof ceramic design, which is forged in a kiln over five days, the Chinese mobe maker says. The design also uses a hole-punch to house the 32MP selfie camera and infrared depth sensor, rather than a notch in the front screen.

Predictably, the 3.5mm jack is nowhere to be found. The range does, however, have an in-screen fingerprint reader, which Huawei says offers a 30 per cent speed improvement over the previous model. 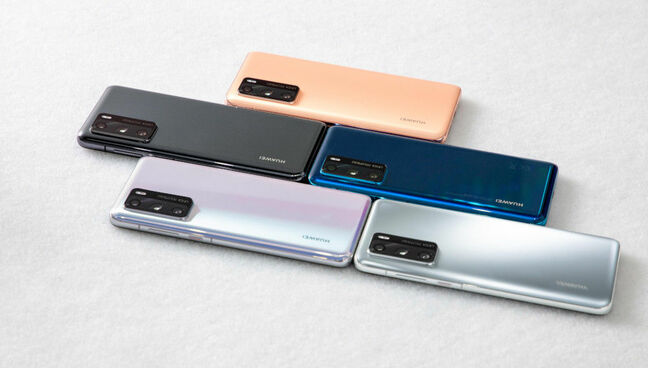 Get rid of passers-by ... from your snapshots, that is

Measuring 6.1 inches is the bog-standard P40, which has a pixel density of 420ppi. Bezels tightly fit the screen, measuring 3mm at their widest point.

Huawei has given the P40 a three-camera setup, culminating with a 50MP primary lens, which uses the firm's new red, yellow, yellow, blue (RYYB) sensor. This is physically larger than that found on the P30 Pro, measuring 1/1.28-inches, allowing it to absorb 40 per cent more light than the previous effort. 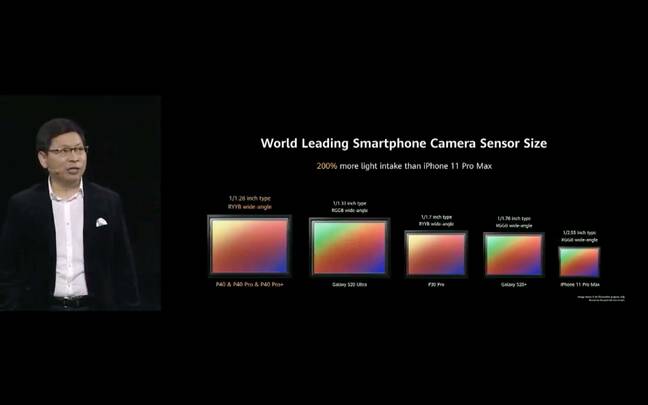 The P40 also includes an 8MP 3x optical telephoto lens, in addition to a 16MP ultra-wide shooter. There's also an eight-channel multi-spectrum colour temperature sensor. All of this is augmented with Huawei's AI tech, which can adjust the camera settings based on the subject being photographed, as well as the surrounding conditions.

Of course, this time round, Huawei has raised the ante, allowing users to remove unwanted reflections from pics. It can also scrub passers-by from photos, which is a task that previously required the laborious use of Photoshop.

Powering this is the Kirin 990 SOC, which uses the firm's latest 5G radio. According to Huawei's own benchmarks, this provides 23 per cent improved CPU performance, while GPU and NPU tasks see a claimed boost of 39 per cent and 460 per cent respectively. Meanwhile, power drain has been reduced across the board, with the GPU consuming 32 per cent less energy.

In terms of connectivity, there's a dual-NanoSIM setup, with one slot capable of accepting Huawei's NM storage cards. Users can also choose to use the latest eSim tech to connect to mobile and data services. Meanwhile, there's a Kirin W650 Wi-Fi 6 Plus radio buried within the device's innards.

Charging comes via a USB-C slot, which supports 40W fast powering up. With no mention of wireless charging during the firm's keynote, one can assume it's not available on the entry-level model. 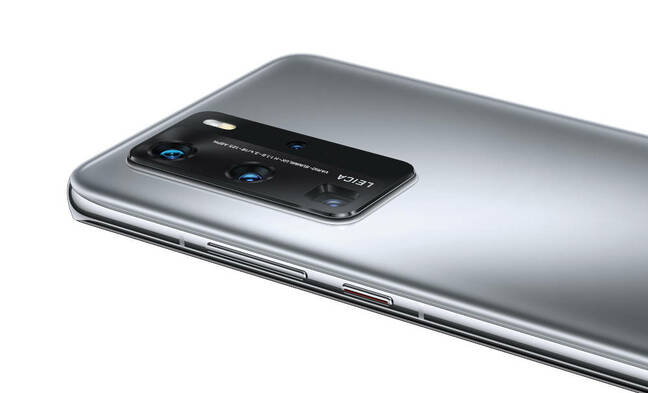 This packs a quad-camera configuration, starring the same 50MP primary sensor as the P40, but with a few others tacked-on: including a 40MP ultra-wide cine camera, a 12MP 5x optical telephoto lens, and a depth-sensing TOF camera. Furthermore, the primary and telephoto sensors also include OIS, to reduce judders while taking pictures.

The P40 Pro does support wireless charging, with a top capacity speed of 27W. This is measurably faster than the iPhone 11 Pro Max, which only supports 7.5W via a Qi charging pad. 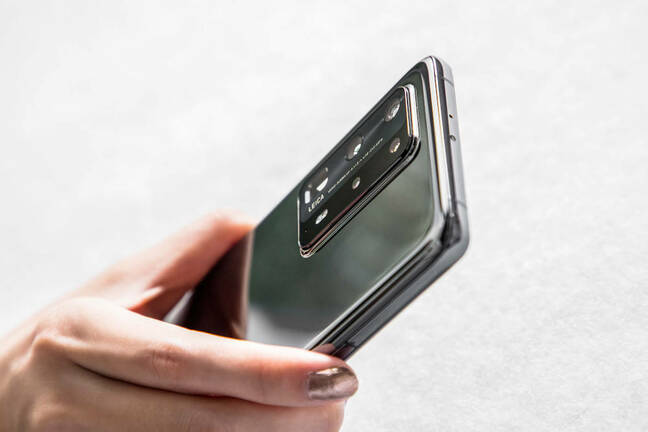 Huawei is touting the P40 series (but especially the P40 Pro+) as capable of professional-quality photography. Consequently, it's launching with an ecosystem of third-party accessories, including a Bluetooth-enabled professional studio light made by Profoto.

In addition to the USB-C fast charging, the P40 Pro+ also supports 40W wireless charging – although third-party peripherals that can handle these speeds are in short supply. 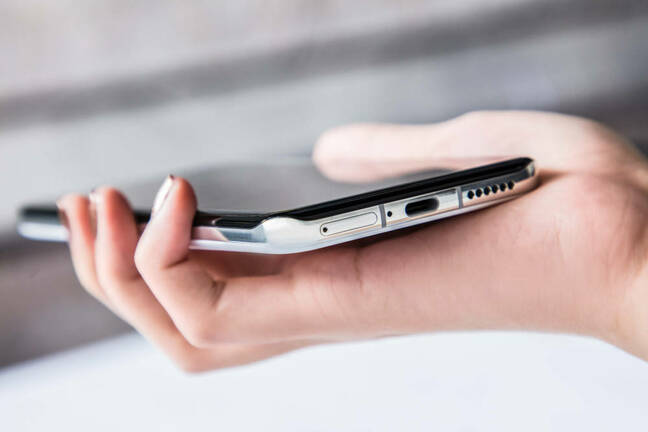 Getting up in your grille (the pimped up Pro+ speaker)

Of course, Huawei is still subject to a punishing US embargo preventing it from licensing any American-made tech. This extends to the Google Play Store, forcing punters to use the growing (but comparatively barren) Huawei AppGallery.