Bork!Bork!Bork! Worried about The Rise Of The Machines in these troubled times? Cheer yourself up with another example of what computers get up to when humans aren't watching, courtesy of your self-isolated vultures at The Register.

Today's computer behaving badly is of the fruity variety as a Raspberry Pi-powered digital sign had a crack at booting before succumbing to the deathly embrace of the bork.

Snapped at Portugal's Faro airport last month by Register reader Ken FitzGerald-Smith, the sign is a reminder of happier times, when all we had to worry about was whether our bag would arrive on the luggage carousel in one piece (or at all).

The Pi in question looks to be one of the originals, using a Broadcom BCM2835 chip (judging by the hardware name) found in the Model A, B, B+, Zero and Compute Module. Since it's digital signage, we suspect the latter. The Compute Module is a neat repackaging of the guts of a Pi on something that will happily fit onto a DDR2 SODIMM connector. 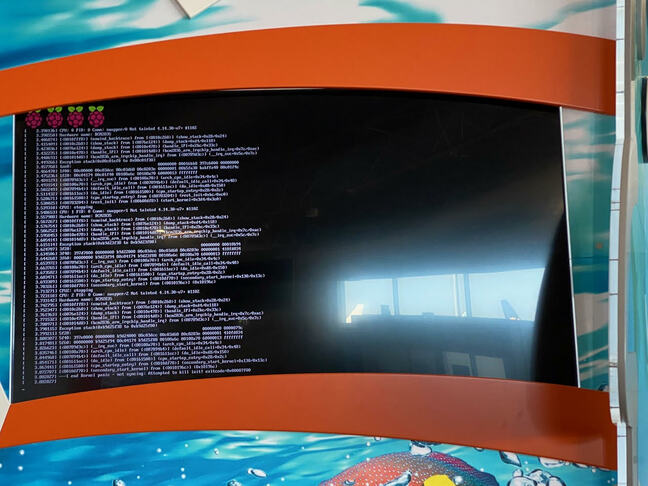 It was superseded by the altogether beefier (but still diminutive) Compute Module 3+ last year, replete with more RAM and storage options. Because industry is less than keen on change, the original will remain in production until at least January 2026.

While originally envisioned as a tool for teaching (indeed during the current lockdown, the offspring of this vulture is happily crafting all manner of horror in Scratch on a handy Pi), the inexpensive multipurpose low-powered computer has attracted commercial eyes, and so here we are: looking at one being a bit poorly next to a Faro luggage carousel like a Brit holidaymaker who started the party a little too early.

As for the error, something has made Linux throw in the towel. Possibly a hardware issue or something amiss or corrupt in the storage department. Please use the comments below for your diagnosis of these spewings of a Pi in distress.

Otherwise, please enjoy the view of bork before baggage claim. It might be a while before some of us pass that way again. ®