Lockdown ain't easy. And that's without snoring, burping, hair-shedding seals outside your house

Folks at one Antarctic base have noisy, stinky, neighbors right now. And they're isolated until November 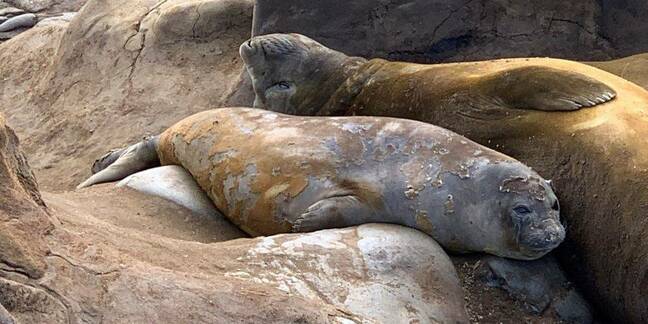 A pair of elephant seals moulting in a wallow. Image: Rachel McInerney

Reg readers confined to quarters for the duration of the global coronavirus pandemic are probably not enjoying being at home all day, every day.

But at least your home is almost certainly not beset by snoring, moulting, smelly elephant seals.

That's what the locked-in staff at Australian Antarctic base Davis Station are dealing with right now, thanks to the presence of plenty of the beasts on a nearby beach.

One of whom, an environmental officer on the Davis Aerodrome Project named Rachel McInerney, penned the This Week at Davis blog that brought us news of the seals.

McInerney explained that the seals are currently moulting – the annual ritual of shedding and growing new skin and hair. They do so in wallows – "mounds formed over many years and are made up of seal hair, excrement, sand and even the odd body, all of which have been compressed and frozen over the years.

"The seals themselves have quite an aroma as they huddle together… and then there's the sound. Either bellowing during a fight, burping (better out than in) or snoring away, the range and volume of sounds coming from an elephant seal wallow is very impressive."

Most of the seals around Davis are young males so the wintering expeditioners also get to hear them testing their fighting skills. That, McInernery wrote, means the sounds of "growling and throwing themselves at each other".

Being locked in next to a seal colony isn't all bad. McInernery rated the beasts as having "beautiful eyes and even a snotty nose can seem quite cute at times".

The seals also have quite the ordeal ahead of them. "The sea ice is forming quickly at Davis this year and it means those seals who have left their moult until late in the season have a very long shuffle (a few kilometres, poor things) across the ice before they can reach open water and head north again," McInerney wrote. "We wish them well and will miss them when they're gone as they really are great characters and fascinating animals."

The seals will leave Davis long before its winter crew, who are typically relieved in November. Hence McInerney's work on an aerodrome, which is hoped to provide year-round transport to the base.

You can get a look at Davis and learn about the Aerodrome Project in the video below. ®

Updated Crowdsourcing is the future of (pubic) navigation

Awaken not the Elder Things, lest they and their shoggoths again battle foul Cthulhu

Hey, these tiny nuns REALLY like their fish! Wait a minute ...