Announcing the official Reg-approved measure of social distancing: The Osman

Look on my beanpoleness, ye Blighty, and mea-sure! Far away enough? Check our converter and find out! 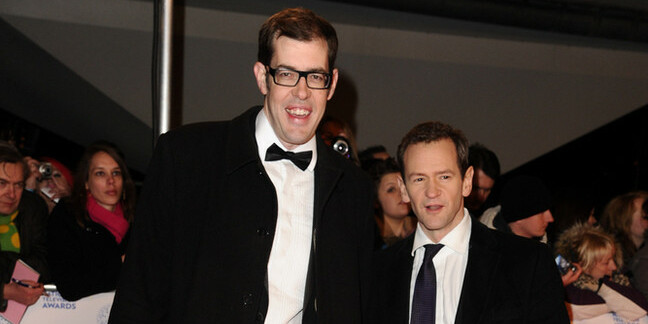 As you nervously shuffle away from your close-talking neighbour who always stood too near at the best of times, tutting and muttering "social distancing", you may wonder to yourself just what two metres or six feet should really look like. Luckily, El Reg's Standards Soviet is here to help.

The BBC – Britain's responsible national broadcaster – has decreed that its on-screen personalities should lead the nation by example and "socially distance" themselves from each other during the COVID-19 pandemic. So it was a few days ago that Dan Walker, regular host of breakfast telly programmes on the Beeb, was engaging in a little light consensual tweeting on that point.

Thus it is, thanks to Walker's use of the vertically unchallenged TV personality Richard Osman as a unit of measure, that today we proudly induct Osman into the hallowed halls of the Register Standards Converter as the approved unit for the measuring of social distancing, that lovely phrase describing how far away from strangers you need to be so you don't catch the novel coronavirus.

One of Walker's viewers posted a screenshot of him on BBC Breakfast with co-host Louise Minchin. The two were seated on opposite ends of the programme's famous sofa, with the viewer joking that the two presenters would soon be "in different studios" if they got any further apart.

We are trying to demonstrate what 2 metres looks like. I'm imagining @richardosman lying between us on the #BBCBreakfast sofa#KeepYourDistance #SocialDistancing https://t.co/Fz7hXlaxbl

Who is Richard Osman? He's the co-presenter of deadly serious daytime telly quiz show Pointless, for which he fulfils a sort-of Dictionary Corner function while bouncing jokes off co-host Alexander Armstrong. Osman is also one of the tallest men in recorded human history British TV, at 6 foot 7" (2.0066m), and is regularly teased by other telly personalities on programmes such as Have I Got News For You for his ability to let the rest of us know when it's about to rain.

Government advice on not catching the COVID-19 includes exhortations to come no closer than two metres (six and a half feet) to people whom you don't live with. Sage advice for life in general, never mind pandemics.

You can access and convert your way through Osmans on the Standards Converter page itself, as well as finding out how much linguine it takes to reach from Earth to the Moon, how many NHSes the annual US defence budget would buy you, and exactly how large your local park is when expressed in precise sub-divisions of the surface area of Wales. Go forth and convert! ®