Remember that clinical trial, promoted by President Trump, of a possible COVID-19 cure? So, so, so many questions...

As world leaders face mounting pressure to contain the novel coronavirus, and hospitals are overwhelmed with patients needing beds and ventilators, there is a desperate search to find a vaccine as well as a cure. Unfortunately, desperation can lead to the grabbing of straws.

Medics and researchers have given some COVID-19 sufferers drugs designed to treat other illnesses to help alleviate their symptoms. Chloroquine and hydroxychloroquine, normally used to treat malaria, and azithromycin, an antibiotic, have been touted as potential treatments although there is little evidence to back it up.

Last week, Trump said he hoped hydroxychloroquine and azithromycin would be “put in use immediately” and cited a paper published in the International Journal of Antimicrobial Agents as evidence of their effectiveness.

HYDROXYCHLOROQUINE & AZITHROMYCIN, taken together, have a real chance to be one of the biggest game changers in the history of medicine. The FDA has moved mountains - Thank You! Hopefully they will BOTH (H works better with A, International Journal of Antimicrobial Agents).....

Let's take a closer look at that study, led by France's Aix-Marseille University. The clinical trial, which involved just 42 patients who tested positive for COVID-19, was, it is argued, not particularly well designed, with too many variables, potentially throwing the results and its conclusions in doubt. The patients were of different ages, were affected by the illness to different degrees, and treated at different hospitals in France in three groups. Six of the test subjects, one of which died, did not even complete the experiment.

All the patients were tested for COVID-19 virus levels with nasal swabs during the 14-day study. The trials were cut short for the aforementioned six who were given hydroxychloroquine only. Three of the six had worsened enough that they required intensive care, one died, one got too sick from the drug, and the other decided to leave hospital. In the end, the hydroxychloroquine group dwindled to just 20 patients instead of the initial 26.

Here’s a graph of the results: 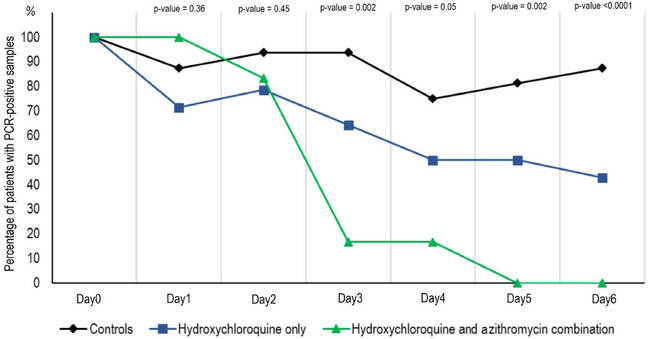 Graph showing the rate at which patients reduced their coronavirus count after taking, or not taking, hydroxychloroquine and/or azithromycin ... Tap to enlarge (Source: Raoult et al)

“Despite its small sample size our survey shows that hydroxychloroquine treatment is significantly associated with viral load reduction [or] disappearance in COVID-19 patients and its effect is reinforced by azithromycin,” the paper concluded.

Was the paper even peer-reviewed?

There are so many questions arising from this study. Was the trial fair? What about the people who got too sick to continue or died? Why do the results only include data from the first week when the trial supposedly lasted 14 days? These queries, and others, were left on PubPeer, a website where academics can discuss papers after peer-review.

Elisabeth Bik, a science consultant and an expert in microbiome research, dug deeper, and found more red flags; not only is the study seemingly flawed, it appears to have been whisked through the peer review process. The paper was accepted on March 17, a day after the study ended, and published online three days later.

It often takes several months for a paper to be accepted and published online, as reviewers and editors work through the contents and suggest edits to the authors. Even allowing for the urgency surrounding the coronavirus pandemic, the paper's rapid turnaround is eyebrow-raising. Bik thought something was up when she discovered one of the co-authors listed on the paper was, in fact, the editor-in-chief of the journal it was published in.

“This would be the equivalent of allowing a student to grade their own paper,” she said. “Low and behold, the student got an A+.”

Bik told The Register the academics – led by Didier Raoult, a well-known French doctor and microbiologist who is skeptical of human-caused climate change – should have seen the criticism posted on PubPeer by now, and they have yet to respond. “The page dedicated to the preprint of the Raoult paper has been set up to send emails to four of the authors of the study. That post has over 50 comments, so all four authors must have each got 40 emails by now. So far, none of them have responded,” she said.

“This does not mean I am accusing anyone of science misconduct," Bix told El Reg. "But as the senior author and leader of his institute, Raoult is ultimately responsible for the quality and integrity of everything that has his name on it. In scientific publishing, all authors accept that responsibility, and the senior person is responsible for creating an atmosphere of honesty and integrity in their lab."

Given the clinical trial's shortcomings, Bik believes the evidence for hydroxychloroquine and azithromycin as effective drugs to treat COVID-19 is still too thin.

“It is too early to tell, in my opinion," she said. "An additional randomized clinical trial, in which patients who will or will not be treated with hydroxychloroquine and azithromycin should be randomly assigned to either groups, and not handpicked by the study authors, is needed.

“The two groups should be larger than the Raoult study, which should not be hard since there are so many people being infected. There should also be a large trial to study the effectiveness of the drugs as a prophylactic, which has not been proven at all so far, but which is how most people want or believe it to work.”

Raoult, and his co-author and editor-in-chief of the International Journal of Antimicrobial Agents, Jean-Marc Rolain, did not respond to The Register's request for comment. ®

A husband and wife in Arizona took chloroquine phosphate, an ingredient of fish parasite killers rather than the anti-malaria medication, following the President's recommendation. The man died soon after ingesting the toxic chemical. His spouse was left in a critical condition. "Trump kept saying it was basically pretty much a cure," she later told NBC. “Don’t take anything. Don’t believe anything. Don’t believe anything that the President says and his people ... call your doctor.”

America's medicines watchdog, the FDA, has granted emergency approval of hydroxychloroquine and chloroquine as a treatment for COVID-19 amid concerns over side effects and unproven benefits.