Future astronauts will need to be prepared to shed blood, sweat, tears, and, erm, possibly urine, too, if they want to build a home base on the Moon.

If explorers really want to colonise Earth’s natural satellite, they’ll need to build something permanent on the surface. Spaceflight is expensive, so sending materials to build a habitable hub would rack up eye-watering costs. So, why not just build the base using raw materials found on the Moon?

That’s the thinking behind a series of experiments carried out by a group of eggheads at the European Space Agency’s (ESA) European Space Research and Technology Center in the Netherlands, Østfold University College in Norway, the Polytechnic University of Cartagena in Spain, and the University of Padua in Italy.

They experimented with DNA-1, a material predominantly made out of silicon dioxide and aluminium oxide, which was developed by the ESA to simulate lunar regolith – that stuff coating the Moon. Water and urea, a compound commonly found in urine, can be added to the mixture to make a geopolymer, a mud-like material that can be used to build structures.

“To make the geopolymer concrete that will be used on the moon, the idea is to use what is there: regolith and the water from the ice present in some areas,” said Ramón Pamies, co-author of a paper describing the experiments published in the Journal of Cleaner Production, and a professor of mechanical engineering at the Polytechnic University of Cartagena.

“But moreover, with this study we have seen that a waste product, such as the urine of the personnel who occupy the moon bases, could also be used. The two main components of this body fluid are water and urea, a molecule that allows the hydrogen bonds to be broken and, therefore, reduces the viscosities of many aqueous mixtures.” 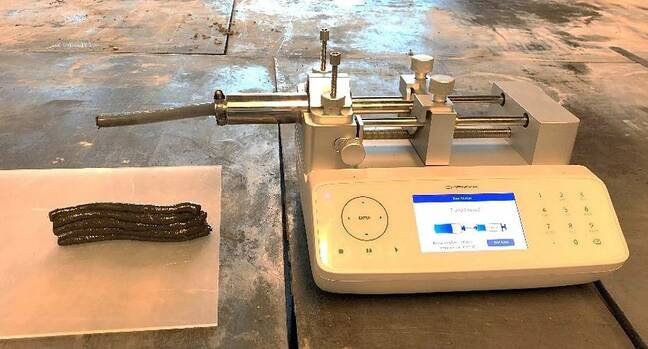 The equipment used to create 3D printed samples of the mixture. Image credit: Shima Pilehvar et al. and the Journal of Cleaner Production

After crafting the urea-based geopolymer mixture, the academics used a 3D printer to produce tubes of the stuff. These were then stacked on top of each other to create mini structures that could be stress tested. The team also developed a second mixture containing naphthalene, a common plasticizer, instead of urea, for comparison.

They discovered that the material made from DNA-1, water, and urea, was stronger than the other type of mixture. It also continued to keep that compressive strength even after it was frozen and thawed eight times. Material sent to the Moon will have to withstand extreme temperatures that can flip between scorching heat and freezing cold depending on where the Sun’s rays hit the surface.

The experiments are still a proof of concept. The boffins haven’t quite figured out how they would extract urea from urine and scale up the 3D printing on the Moon.

“Further studies are needed in order to assess how these lunar regolith geopolymers will behave under the severe lunar conditions, with a vacuum that can cause the volatile components to evaporate, and large temperature fluctuations which might cause crack formation,” the paper concluded.

“The ability of the geopolymers formed under these conditions to withstand meteorite bombardment, and to shield against high radiation levels should also be evaluated. In addition, 3D-printing the lunar regolith geopolymers under lunar conditions is expected to be much more challenging than it would be under normal atmospheric conditions. Additional work regarding these aspects are currently in progress.”

The Register asked the ESA for comment, just want to make sure they aren't taking the p***. They confirmed the details, and said more work needed to be done.

"This study is useful to show the promising use of urea as chemical admixture for making lunar geopolymers," Professor Bernard Foing, director of ESA's International Lunar Exploration Working Group, told The Register on Monday. "Further tests will be needed in analogue lunar conditions of vacuum, extreme temperatures (from -200 C to +110 C), solar radiation and cosmic particles." ®