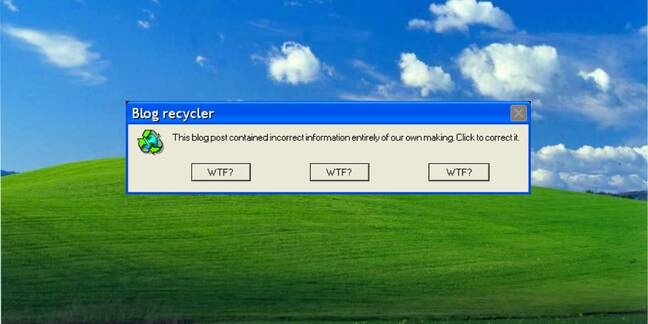 Microsoft has corrected its own claim that it had "seen a 775 per cent increase of our cloud services in regions that have enforced social distancing or shelter in place orders".

The software giant has now updated the post - and published a correction with the US Securities and Exchange Commission - that made the claim with new data, namely: "We have seen a 775 per cent increase in Teams' calling and meeting monthly users in a one month period in Italy, where social distancing or shelter in place orders have been enforced."

Microsoft's outsourced media relations consultancy alerted The Register to the error in the hour before this story was published and said Microsoft's blog was corrected at around 5:55PM on Monday, March 30, Pacific Time. Which means the post offered the error for around 48 hours.

The consultancy told us: "Microsoft was not as clear as they intended to be with the previous statement."

Microsoft has at least been classy enough to apply a strikethrough tag to the mistake, rather than dropping it into an Orwellian memory hole. Doing so would probably be futile, anyway, given the page has already been lodged in the Internet Archive's Wayback Machine, where the error is now preserved for the long term (or as long as it's possible to keep it running during the pandemic).

It's not hard to imagine why Microsoft has made the change. On top of the desire to correct a falsehood, a 775 per cent surge this early in what looks to be a long lockdown could easily spook customers and see them seek out other clouds experiencing less demand.

If such a thing is out there to find given one source says the hyperscalers are actively buying capacity from third-party data centres.

Bevan Slattery, the founder of Australian data centre operator NEXTDC, yesterday took to LinkedIn with a post that proclaimed: "Data centres are the new toilet paper."

Slattery said cloud providers are "seeing 5-100 per cent capacity spike already and are expecting 100-200 per cent requirements in the near term. Already major clouds are scrambling to grab every available MW [megawatt] of DC capacity available and locking up future builds".

NEXTDC is strongly suspected of having some Azure business and offers Azure express route services. ®