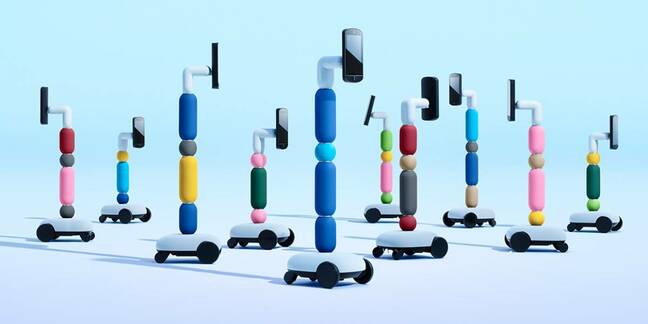 Japanese airline ANA has spun out a startup to develop and sell “avatars” - robots that comprise a remote-controllable stand with iPad-like device running a Facetime-like app, to bring your face into a room.

ANA has been working on something similar since around 2016 and clearly thinks the time is now to graduate the idea from its labs into a startup. It’s found ¥200m (US$1.8m £1.5m) to hurry things along.

ANA’s not alone in the telepresence bot market: we covered them in 2012 when an outfit named Suitable Technology introduced the Beam Remote Presence Device.

Former Register columnist and now Juniper Networks marketer Trevor Pott is a fan. “I use them to attend events that I otherwise couldn't,” he said. “But if I'm being honest about it, I would use them in place of virtually all travel, and certainly all business travel if I could get away with it.”

One reason is he just doesn’t like the time travel requires. The other is that he finds big conferences confronting. “Within minutes I have a pounding migraine, and within a few hours I am usually climbing the walls to escape,” he said. “Sometimes on the cheaper models it can be hard to hear or be heard...but the higher end ones are great, even in noisy environments.” His Reg review of using a telepresence bot is here.

As the airline’s machine-translated announcement says: “To respond to the urgent issue of the new coronavirus, we will give priority to the proprietary and widely used communication avatar "Newme" for medical facilities that require remote communication.”

“We have already begun to provide services to some university hospitals and medical corporations ahead of time. However, we hope to provide more services as needed to help medical professionals who are on the front line. In the future, we plan to use avatars as social infrastructure to develop services that can be used for various purposes such as medical care, nursing care, education, shopping, appreciation, and tourism.”

And of course the new company, named “avatarin”, has a very StartupLand mission statement: “To create a future where all people can connect beyond all limits such as distance, time, cost and body.”

ANA has discussed this idea before in the context of virtual tourism, and even suggested that it could have product in market during 2020.

avatarin’s site suggest it is ready to roll.

ANA yesterday announced a slew of new flight cancellations and like other airlines faces an uncertain future. Perhaps avatarin will help it to find new sources of revenue. ®