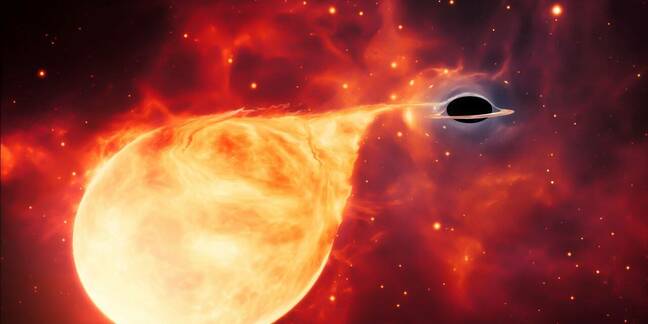 Astronomers have discovered what they believe could be a black hole of intermediate-mass nestled on the outskirts of a large galaxy more than 700 million light years away.

Observed black holes typically come in two sizes: small ones ten to 100 times the mass of the Sun, and gigantic supermassive ones that are millions to thousands of billions the mass of the Sun. There seems to be no in-between; although medium-sized ones can theoretically exist, scientists haven’t observed any to date with high confidence.

Now, a team of boffins working across the US, France, and the Netherlands believe they have found a promising candidate for one of these elusive in-between black holes, measuring about 50,000 solar masses. Snappily code-named 3XMM J215022.4−055108, the eggheads discovered the intriguing object while combing through signals gathered by NASA’s Chandra X-ray Observatory and the European Space Agency’s X-ray Multi-Mirror Mission (XMM-Newton) spacecraft.

As the names of the probes suggest, the academics were drawn to 3XMM J215022.4−055108 after spotting a burst of radiation that appeared to be the result of a star wandering too close to a black hole.

“The most promising explanation for the source is that it is an intermediate mass black hole in an off-center star cluster with the X-ray and optical outburst due to a tidal disruption event (TDE), in which a star having a close encounter with the black hole was tidally disrupted and subsequently accreted, producing the multiwavelength flare,” according to the team's write-up, published in The Astrophysical Journal Letters this week. Here’s the free pre-print version.

Observations made using NASA’s Hubble Space Telescope revealed the burst was emanating from the edge of a lenticular galaxy. The researchers have ruled out the possibility that their discovery is just a cooling neutron star.

Supermassive black holes are found closer to the center of a galaxy, unlike 3XMM J215022.4−055108. Based on the X-ray spectra, the scientists calculated that the object’s mass is more than 50,000 times that of the Sun making it more substantial than stellar-size black holes but not quite as significant as the stupidly massive ones.

Dacheng Lin, first author of the study and a research scientist at the University of New Hampshire, United States, told The Register that intermediate-mass black holes (IMBHs) have been difficult to find because they're less active than supermassive ones.

“Intermediate mass black holes might not be rare," he said. "In fact, our identification of this event which is expected to rarely occur means that there should be many IMBHs in our local universe. They are hardly seen just because they tend to sit in the environment with few materials to accrete.”

In short, the scientists appear to have caught their target in the midst of feasting on nearby star that came too close and detected the large emission of electromagnetic energy from the accretion process.

“Studying the origin and evolution of the intermediate mass black holes will finally give an answer as to how the supermassive black holes that we find in the centres of massive galaxies came to exist,” said Natalie Webb, co-author of the study and a astrophysicist at the University of Toulouse, France. ®