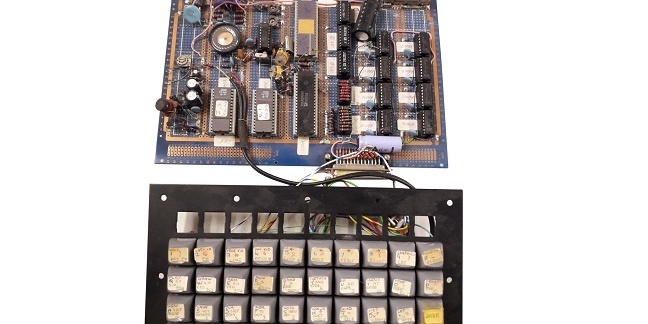 Got some unexpected time on your hands and a yearning for simpler times? May we present an original prototype ROM of the Sinclair ZX Spectrum, courtesy of The Centre for Computing History, for your tinkering pleasure.

It has been just over a year since Kate and John Grant let the team at CCH get hold of the prototype, replete with handwritten labels and lacking the familiar rubber keyboard and sleek plastic case.

At the time, we noted the substantial differences in the appearance of the hardware, from the delightfully hand-made touches, such as the wire-wrap, as well as differences in connectors and layout. But, at its heart, it was still the ZX Spectrum known and loved (and argued over) in 1980s playgrounds across the land.

At the time, curator Jason Fitzpatrick told us the plan was to get the content of the ROMs dumped for preservation and then have a crack at getting the thing powered on.

Fans of Sinclairs will be pleased to learn that the former has been accomplished, but sadly the latter has not gone so well.

Finding themselves (like so many at the moment) with time on their hands, the team has extracted the ROM image and also obtained permission to distribute it via the museum's website (for research and educational purposes only).

Fitzpatrick has also posted a video showing the ROM in action (yes, that is Windows XP on a Toughbook) – and while there are differences, it appears complete enough to run the classic Hungry Horace game of nearly four decades ago.

The Register asked Fitzpatrick what had caused the hold-up. "The most part of it is down to time," he said, explaining that as well obtaining permission for distribution, the small matter of actually running the museum meant that projects such as this got pushed aside. However, the doors have had to be closed due to the COVID-19 outbreak, and so (confined to their homes) the team could make some progress.

Noting that the ROM runs slightly differently in different emulators (and admitting that "I'm no Speccy expert!"), Fitzpatrick pointed to the efforts of the community in working out what was hidden within the artefact. Discoveries so far have included hints of an early incarnation of the Microdrive software, which was later removed in production.

Alas, the board itself appears to be unhappy. The team removed all the chips and tested the circuits before putting the silicon back in and firing up the prototype... "Sadly it didn't work," Fitzpatrick said. "It produced a black screen with [a] white border."

A bit like the Spectrum lurking in this hack's collection, which has probably played its last game of Football Manager.

There are no immediate plans to repair the thing, as Fitzpatrick observed "we haven't had time to dedicate [to] fault finding it," noting that with the ROMs downloaded, there was little need to make it functional and "we certainly wouldn't want to replace components to make it function as then it is no longer completely original."

While we can sympathise with this approach, there is a certain joy to be had in resurrecting dead bits of electronics. "It's interesting," said Fitzpatrick, "museums take a different view to preservation than a collector might."

As for the prototype itself, the museum is open to suggestions of loaning the device to other establishments for display (once the country is able to slip the national gearbox out of neutral) and continues to be on the lookout for unusual hardware or, better, the behind-the-scenes documentation of the companies and people behind the computing artefacts.

Naturally, we downloaded the ROM and took it for a spin in a handy emulator. The really interesting stuff comes when one starts poking about to see how things differ and speculate on what was going through the minds of the designers.

If retro ROMs are your thing, we'd recommend a download and, hey, maybe have a click on that donate link too if you're inclined. ®

Crowdfunder asks to be reimbursed on behalf of backers