The case of Simon and the crunchy onion bhajis

"Hello, Simon?" a close-up of the Boss's hairy throat asks. 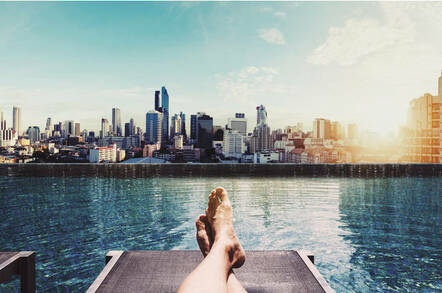 "I was just thinking – did we turn off all the printers?"

"Are you sure? I was thinking the one next to my desk might still be..."

"Only I think someone should go and check. I was thinking I might just pop in."

Symptom Two: Lowered feeling of self-worth from being away from work too long.

"Well, I thought I'd maybe pop in and check anyway. And while I was at it I thought I'd check out the cafeteria as they're always leaving things on…"

The problem with isolation is that with a holiday you have IN THEORY planned something to do with your time and so have an objective in mind. In a case like this where the company proactively implemented a lockdown days before anyone else had too much time on their hands and didn't know what to do with it, the Boss is just searching for some believable reason why he simply has to get out of the house for a day – or possibly two if he could swing it.

"No point, you wouldn't be able to get into the building anyway. It's in lockdown."

"But you can override it?” The Boss asks, with a hint of desperation in his voice.

And to be honest I do feel a bit for the bloke. Having only witnessed his marital "bliss" at a couple of brief staff functions, I could honestly say at this stage I'd probably be reaching for the Panadol sandwiches.

"Oh, it would be more than my job's worth to override the security system," I say, ticking off the "jobsworth" box on my isolation check sheet.

You have to make your own fun.

"But someone should check."

"I tried," The Boss wheedles. "No one's answering."

"Totally. Look, if I was you, I'd not worry about work and break out the Monopoly!" I say, knowing full well that adding Monopoly into the Boss's domestic situation will probably result in a homicide.

I make a mental note to ring the PFY to see if he wants to make a bet about who the survivor will be.

Again, making your own fun.

My thoughts are interrupted by an alert that someone is trying to gain access to the building and has been denied. It's not security because there's only one per shift now and he's already in the building but confined to the ground floor. (By "confined" I mean that I disabled the lift and there's no way any of our guards would attempt the stairs without a resuscitator and a cardiac surgeon on standby…)

On the camera feed I can see the potential entrant is one of the guys from the coloured pencil office – the least critical part of the company. I watch him inspecting his card for damage and trying again. On another feed I see our security guard standing about five metres from the door in question, shaking his head while munching on a sandwich.

"I just had a call from Brian," the Director says. "He thinks there may be some printers left on in the office. He thinks he should go down and check on them."

"I checked all the printers before we left," I lie. "They're all off. I also checked the camera feeds around the building – no printers, photocopiers, screens, toasters, stoves, irons or thermonuclear reactors are on."

"Are you sure? I think maybe I should pop in and check. I'm probably the closest, so it would b…"

"I still think I might notice something you missed. I could check a couple of floors where the cameras aren't as common. The third floor for instance."

"No, the board was quite clear that once we leave the building we are not to return. Coming back would invalidate some clause in their insurance which is worth more to the company than your employment contract – and pension plan. If you get my meaning."

"The building could burn down," he says, clutching at straws.

"You're living in the building?!"

"Indeed. I mean, I am roughing it a bit – I had to move the huge couches from the boardroom down. And I try to get out to the roof garden as much as I can for exercise, weather permitting. I'm in regular contact with a couple of people in neighbouring buildings who had the presence of mind to similarly exploit certain loopholes in their company's lockdown procedure."

"Yes, it seems that many of us have a similar contract whereby if we stay on the premises for longer than 24 hours we're entitled to certain benefits."

"Yes, you know salary entitlements etc. but the one thing that I think will interest both you and the Boss – with your fixation on the third floor – is that the company is obliged to feed me."

When the Geneva Convention is extended to food crimes I have no doubt that the company chefs will be summarily executed. However, their one redeeming dish is their onion bhajis. Somehow, like an infinite number of monkeys banging away at an infinite number of mixing bowls, they managed to create a culinary delight that many would kill for – and I just might, if security ever makes it to the first stairwell landing.

I can see from the Director's expression that I have hit home.

"You know, there's an entire freezer full of them, and I have calculated the precise amount I need to deep fry each day to get me through the lockdown period – if I don't die in a methane explosion beforehand. I also found the recipe book and loads of frozen raw materials so I could make any number of dishes which would probably see me to Christmas, but I'll probably just make bhajis. I trade them with neighbouring buildings via wires between the rooftops you know."

"Or maybe I'm not here at all. I'm certainly not on any security footage. Maybe all the damage will be found to have been caused by some number of street youths who broke into the building. Maybe they defecated on your desk?!"

"Or maybe you'll just continue along like we never had this conversation and come back to work to a nice clean office with a nice clean desk, with drawers that have only been used for storing office stuff?"

Right, time to switch the deep fryer on and break out the Fringe box set!