Did you know that the popular Diet Coke and Mentos soda geyser experiment works better at higher altitudes? Or that the average size of the bubbles formed on the scotch mints is about 6μm? Now you do, thanks to the wonders of science and those with a bubbling passion for it.

A chemistry professor and a high school teacher climbed mountains and hiked across deserts in America to find the perfect spot to spike bottles of Diet Coke with Mentos.

“I decided to do these experiments because I not only love the Diet Coke and Mentos experiment, but I have been studying all about it for 15 years now,” Tom Kuntzleman, a chemistry professor at Spring Arbor University, Michigan, told The Register this week.

“A few years ago I did the Coke and Mentos experiment at a friend’s house who lived at 6,000-feet elevation in Colorado. I was surprised at how well it worked compared to my normal experience. I live in Michigan at about 1,000-feet elevation. This made me wonder if the decreased air pressure at higher elevation allowed the experiment to work better.”

The chewy confectionery acts as a catalyst, accelerating the release of carbon dioxide dissolved in the fizzy drink as a gas in a process known as nucleation. This rapid production of CO2 gas bubbles, particularly after the candy has sunk to the bottom of the bottle, forces the liquid out of the coke bottle, and forms a Coca-Cola geyser. It's a physical rather than a chemical reaction.

Now, the aforementioned duo have gathered enough data to figure out the equation that measures the critical size of the bubbles that have to form on the piece of candy to create the frothy eruption. They have to be larger than 3μm – any smaller and they won’t grow big enough to rise up and out of the bottle.

Fizzy drinks including Diet Coke are pumped with carbon dioxide and sealed under pressure. Cracking open a can of the stuff releases that pressure and some of the CO2 dissolved in the sweet liquid makes its way back out as gas, creating the hissing sound. Most of it stays inside the drink, creating the tingling foamy sensation when it’s consumed.

Adding a Mentos candy to the Diet Coke causes more carbon dioxide to escape. The rocky surface of the candy has countless little cavities to trap little bubbles of gas, giving them a space to accumulate until they become buoyant enough to float to the surface. After each bubble escapes, another forms in its wake; the process is repeated numerous times to create a powerful release of carbon dioxide gas. This is amusing to many internet users.

Kuntzleman and his school teacher colleague Ryan Johnson teamed up to see if higher altitudes did indeed produce more powerful soda geysers. Johnson trekked up Pikes Peak, part of the Rocky Mountain range in Colorado 14,108 feet above sea level, and recorded his results.

Meanwhile, Kuntzleman drove across the Death Valley desert, 43 feet below sea level, and up Mount Mitchell, the highest peak in the Appalachian Mountains, 6,638 feet above sea level to perform more experiments.

"If you only count Diet Coke, Mentos, and materials associated with running the experiments it probably cost around $150," Kuntzleman said. "If you start factoring in travel, payment for entrance to national and state parks, cost of gas… I’d rather not think about it."

The Diet Coke bottles were kept at 27 degrees Celsius (80.6 degrees Fahrenheit). Each one produced much more foam at higher elevations, likely due to lower air pressures that allow the bubbles to expand more easily, though that explanation is not confirmed. 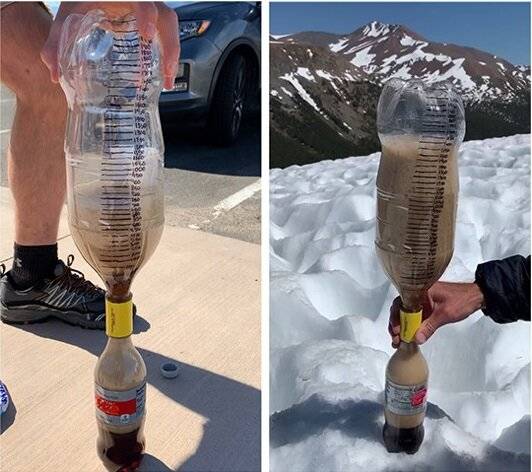 The duo measuring the foam output at a low altitude, left, and high altitude. Credit: Kuntzleman and Johnson

The study has been published in the Journal of Chemical Education. While it may not be Nobel Prize worthy research, Kuntzleman said the experiment is still a neat way of demonstrating fundamental processes like the ideal gas law.

“Because I’m a chemistry teacher, I find the results to be very useful in my classroom. For example, the Diet Coke and Mentos experiment is strongly related to how CO2 gas pressure affects the amount of CO2 that dissolves in water," he told us.

"Therefore, discussing the results of my Coke and Mentos experiments provides a great platform to introduce students to various impacts such as ocean acidification associated with increased CO2 in the atmosphere from burning fossil fuels.” ®

My god, it's full of hydrocarbons