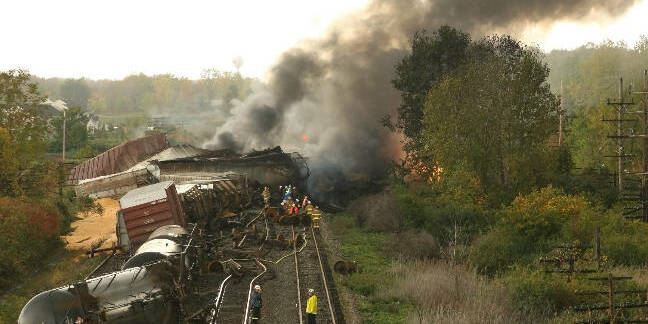 One of Huawei’s flagship projects in Australia has been called off because, as the state government put it, “trade restrictions imposed by the US government create a force majeure event that cannot be overcome.”

The Public Transport Authority of Western Australia, which wants to spend AU$136m (US$82m, £66.5m) to replace its analogue radio systems with a shiny new digital network, has therefore pulled out of the deal on the grounds of force majeure: something catastrophic and unforeseen has occurred.

Huawei and engineering firm UGL won the contract together in 2018, forming the HUGL Consortium to get the job done.

The work was awarded before various US trade restrictions targeted Huawei. Hence Western Australian transport minister Rita Saffioti’s statement: "It is extremely unfortunate that the state government's project – which is limited to a radio network for train drivers and transit guards – has been caught up in the ongoing trade dispute between the US and China.”

The Register understands that the first round of US restrictions didn’t upset the project. But the August 2019 round of sanctions, which added more Huawei subsidiaries to the blockade, made it impossible to get the job done.

The transport authority’s statement on the cancellation goes: “The state government has decided that if the current relationship with the HUGL Consortium is maintained the measures required to try to overcome the force majeure event would result in unacceptable uncertainty around the total cost of the project, final completion time and no guarantee that the proposed solution would be effective. This decision will also ensure the state complies with US trade restrictions.”

Huawei Australia’s director of corporate and public affairs Jeremy Mitchell said: “Huawei is widely regarded as a world-leader in railway communications and Western Australians were in line to benefit from our best-in-class technology on the PTA [Public Transport Authority] project but sadly that will no longer be possible.”

The US administration believes Huawei represents a national security threat – a threat that varies in severity depending on trade negotiation progress and other variables. Huawei is also, it is claimed, not averse to rolling out products eerily similar to equipment developed by American companies.

As a result of the sanctions, US corps are not allowed to export technology to Huawei or related entities without a license from Uncle Sam, and those licenses have not been forthcoming. That cut off Huawei and its constellation of subsidiaries from various American-developed components, software and hardware, and this appears to have introduced enough uncertainty into the rail communications project to drive it into the buffers.

The crackdown on Huawei has now reached all the way to Western Australia and its capital city of Perth, the only city with more than 100,000 residents on Australia’s entire western seaboard. And a long, long way from both China and the USA. ®

Western Australia's state bird is the Black Swan. The bird is native to the region and its discovery in the 17th century ultimately raised all sorts of epistemological questions. Which we mention given the current coronavirus situation has been described as a "black swan" event. Hopefully the state's decision to install home surveillance kit to keep an eye on those in coronavirus quarantine is also a black swan event.