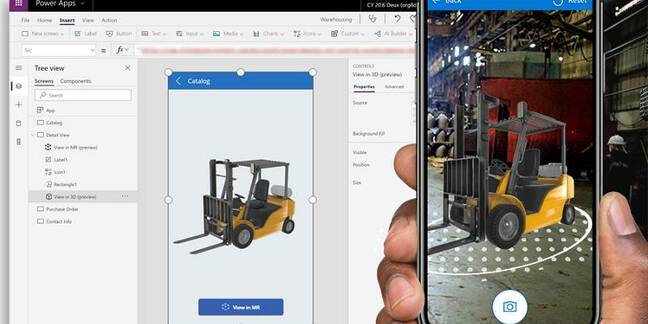 Microsoft has updated its "citizen developer" platform, Power Apps, adding Mixed Reality support, fixing a compatibility issue with the mobile app, and improving options for working with data in grids.

The "Power Platform" is considered to be strategically important by Microsoft. Speaking to investors in January, CEO Satya Nadella claimed that "2.6 million citizen developers" use the platform, which combines the low-code Power Apps as well as Power BI (analytics) and Power Automate (workflow). Under the covers, though, Power Apps are something of a mish-mash, including bits of SharePoint Online, Microsoft 365 and Dynamics 365. The problem is compounded by the fact that despite the branding, both Microsoft 365 and Dynamics 365 are themselves formed by multiple applications of different ancestry.

Microsoft now has a solution in public preview. This will let you access both kinds of apps, according to what your organisation has made available. In addition, model-driven apps now have an updated user interface, which the company assures us has "a native look and feel, gesture support, updated animations, and interaction patterns that are intrinsic to mobile".

New Mixed Reality features for Power Apps were also rolled out. "Mixed Reality" is what everyone else calls augmented reality, where virtual images are blended with the real-world view from a camera. There are three new capabilities. Validate Fit will let you use 3D models to find out if your proposed construction or design will fit in a particular physical space. This sounds like it depends on the second feature announced, which is the ability to make linear or volumetric measurements of physical space via a Power App. Finally, you will be able to use both 3D and 2D models in Power Apps and combine them with the image from the camera in order to see how they will look. The clever bit here is that you can "tap to place", at which point the model appears fixed in the space while you continue to move the camera.

Will you be able to rely on the ability of a Power App combined with whatever camera happens to be in your smartphone, to measure physical space accurately so you can rely on it in production? Interested developers can sign up for a preview now, with public preview promised in May.

Another new feature, this one for model-driven apps and described as a "major usability update", is column filtering in data grids. This lets you click a drop-down button on a column header to get filtering options appropriate for whatever data type is in that column. There is also a new expression builder which lets you query the data in the grid. Those familiar with Dynamics 365 will recognise this as Advanced Find.

Integration with Teams is now improved, with the ability to pick up the visual theme used in Teams, filter apps based on Teams channels, and link to records inside an embedded Power App. Also new is the ability to pin an app shortcut to the bottom of the Teams navigation bar.

Finally, Microsoft has improved its testing and debugging tools. A tool called App Monitor enables you to see a running log of all activity in an Power App, down to the level of network calls, timing, data returned, and any errors. Another tool, Test Studio, lets you build tests using app recording or with Power Apps expressions. There is also a new telemetry tool that lets you discover how many people are using the app, where they are located, and what devices they are using.

Power Platform updates are scheduled in waves, and what we are now seeing is part of 2020 Wave 1. There is more to come as the Wave 1 plan extends until September 2020. Would-be citizen developers be warned: it may be a low-code platform, but there is plenty of jargon to plough through. ®