Gov.UK to ask social networks to do their part... 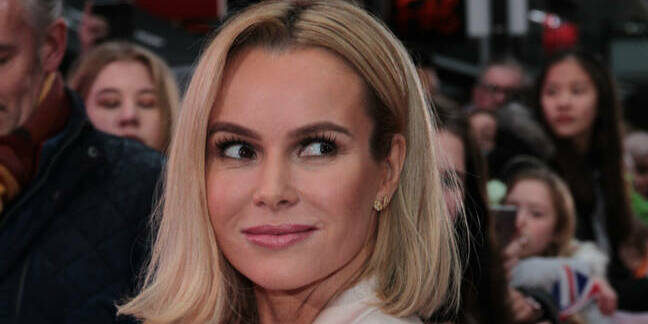 Comment Amanda Holden is not an epidemiologist. She holds no degree in electrical engineering or physics. Her time is spent judging the (often self-contradictory) Britain's Got Talent, or sitting next to Phil Schofield on the couch of This Morning, where she earned notoriety by asking Brit astronaut Tim Peake if he stole any moon rocks on his mission to the International Space Station.

And yet this lack of field-specific expertise didn't stop her tweeting a link to an anti-5G petition to her almost 2 million followers, provoking a furious response from those more reliably informed.

The petition – much like the original tweet – has since been struck from the internet, although it remains on the Internet Archive, where you can read its breathless rants about the dangers of fast mobile internet.

"5G technology is detrimental to our health. 60 megahertz radiation emitting towers use all the oxygen in the atmosphere causing respiratory problems for humans," it warned, before going on to suggest that 5G exposure is the phenomenon driving COVID-19.

"Symptoms of 5G exposure include respiratory problems, flu like symptoms (temperature rises, fever, headaches) pneumonia. Very much like the effects of the Coronavirus."

Of course, none of this is true. For starters – 5G doesn't operate at 60MHz. Presumably the original author meant 60GHz mmWave 5G, which is something of a bogeyman for the Tinfoil Hat Brigade, despite its overall absence from any actual real-world deployments. There's also a bevy of testing, from Ofcom and others, proving 5G doesn't produce anywhere near enough radiation to harm the general public.

And yet it doesn't seem to matter. 5G conspiracies are firmly within the mainstream, promoted by a cast of unusual bedfellows, including boxer Amir Khan, Cheers actor Woody Harrelson, and shellsuit-wearing lizard-botherer David Icke. And as we discovered this weekend, the public are prepared to take matters into their own hands.

In most major cities, anti-5G graffiti is nothing new. The drive from my house into Liverpool's city centre passes no fewer than three daubed slogans: on walls, temporary plywood fences, and bus shelters. But last week, things took a turn for the extreme, with arson attacks on 5G masts in Merseyside, Belfast and Birmingham.

The first mast to be torched was in the Sparkhill area of Birmingham, prompting the call-out of two fire crews to extinguish the burning 70ft (21m) tower. Roughly one hour later, the first footage of the incident made its way online, posted by a user called "Paddymann123" with the caption: "Say no to 5G."

This quickly ignited a brief trend, with copycat attacks elsewhere in the country, egged on by conspiratorial Facebook groups that kept score. One page also offered advice, telling would-be arsonists use a petrol-filled SuperSoaker water gun to cause the most damage, by dousing the apparatus from head-to-toe before setting it alight.

Another video from Belfast, captured on the Antrim Road, shows the suspected arsonists yelling "fuck 5G" and "viva la revolution". Social media platforms have been quick to take down footage from 5G arson attacks, as well as accounts inciting others to commit criminal damage, but it's inevitable that their efforts are nowhere near as proactive enough to deal with the influx of material.

There have also been cases of telecommunications workers being confronted – and in some cases physically assaulted – as they perform their duties. One video posted to Twitter last week shows an irate woman lambasting two engineers for breaking the lockdown (which doesn't apply to them as they're considered key workers) before blaming 5G for the COVID-19 outbreak.

This is the consequence of those bonkers Facebook conspiracy theories about 5G. Key workers getting harassed on the street. pic.twitter.com/5z35r6sabp

"Who's going to be playing on their PlayStation? We'll all be in hospital, hooked up to a machine. They're building 25,000 concentration camps of death in the London Excel right now, and it's because of that wire here," she bleated.

As of Monday, at least 20 phones masts are believed to have been vandalised.

The carriers fight back

The four main UK carriers – EE, O2, Three, and Vodafone – have issued a joint letter imploring people to grass on those harassing engineers and destroying infrastructure. The letter emphasises the importance of telecommunications during the lockdown, and the absence of a link between 5G and the novel coronavirus.

"It beggars belief that some people should want to harm the very networks that are providing essential connectivity to the emergency services, the NHS and rest of the country during this difficult lockdown period," he wrote on LinkedIn.

The government is reportedly to enter talks with the major social networks to convince them to take firmer action against the 5G conspiracy theorists. It's not yet obvious what that will look like in practice.

Whatever action is taken, it'll almost certainly prove ineffective – if not utterly counterproductive. When confronted, people tend to double-down on their pre-existing worldviews. A Yale study, published in 2017, found that people are only 3.7 per cent more likely to disbelieve content that's been flagged as "disputed".

That's because conspiratorial thinking often stems from a lack of confidence in institutions. An analysis of conspiracist content published by Frontiers in Psychology in 2015 found that they were vastly more likely to express mistrust (in society, groups, institutions, and specific people) than those posts deemed "conventionalist".

The researchers also found that conspiracists tend to look favourably on other fringe theories. And we suppose that there's not that much of a leap between thinking that the attacks of September 11 were an inside job to believing that 5G antennas are a human-cleansing bioweapon cooked up in a government lab.

When it comes to stopping the spread of conspiracist thinking, we're probably too late. That horse left the stables long ago. But what about the institutional trust thing?

That feels a lot more feasible, but at the same time, almost impossible. We live in a world filled with confusion. It's a scary time to live. And sometimes it's just easier to accept the comfort of knowing that everything's a conspiracy than swallowing the bitter pill of reality. ®