Remember when we went outside and used cash machines? Haha, good times

Bork!Bork!Bork! Microsoft Windows is everywhere. Everywhere. And sometimes it can catch out the unwary, as the administrator behind this ATM has hopefully discovered.

The cash machine in question, snapped by an eagle-eyed Register reader, is located somewhere in the southern region of Manchester. The area features such delights as the excellent Whitworth Gallery and the Manchester Museum.

If life is just a bit too racy for you, there is also the Old Trafford cricket ground a bit further west, as well as the home of Manchester United, a popular football team.

Sadly, all are currently closed; this image was taken a few short weeks ago, before the current restrictions under which Blighty's citizens are living came into force. 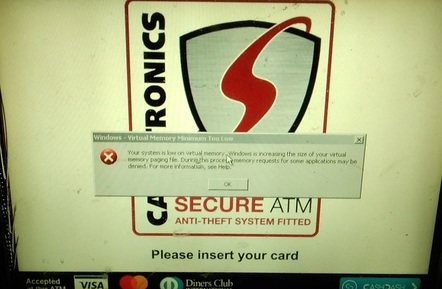 Still, seeing a bork on an ATM is now a reminder of happier times and this one looks very much like Windows (possibly version 7 in "classic" theme) has done a whoopsie. The window chrome could point to something like XP, but surely nobody would be running a cashpoint in 2020 using that old thing. Would they?

The message itself, just visible through the vaguely horrific grime on the screen (we hope our reader washed his hands very thoroughly after standing so close) is the infamous "Virtual Memory Minimum Too Low", which usually pops up when Windows decides that whatever its paging file size has been set to just simply won't do.

A sudden desire for more virtual memory could be a symptom of a new application being RAM hungry or something else leaking memory like an incontinent baboon on a waltzer. Either way, there is an OK button awaiting a click but, frankly, we're not sure we'd want to fondle that crusty display, even if it were touch-enabled.

Still, it's good to see the "Anti-Theft System" in action, even if it does appear to consist of Windows yelling about storage. As our reader observed: "Poot-a der veertual meemoory een-a der com-pooter... bork bork bork!"

Care to brighten these dark days with a shot of some public-facing hardware flashing its privates? Share it with us in email form for your own entry in the Bible of Borkage. ®

Two cuffed on suspicion of US ATM jackpotting plague

Freezing in Newcastle? You're not alone: For one lonesome creature, the world stopped on 31 Dec 2020

Bork!Bork!Bork! The Natwest ATM of woe says no, bleats a plaintive: Børk!

'Help! I'm stuck in this ATM,' writes poor bloke on a scribbled note

Don’t talk to the ATM, young man, it’s just a machine and there’s nobody inside

On-Call But there was a network tech inside, wiring it up. And in the right bank, this time

What's that lurking behind the borked face of finance? Windows, of course

Bork!Bork!Bork! Rule number one of sausage club: never ask what goes into the sausage