Commanding & Conquering when nobody is looking 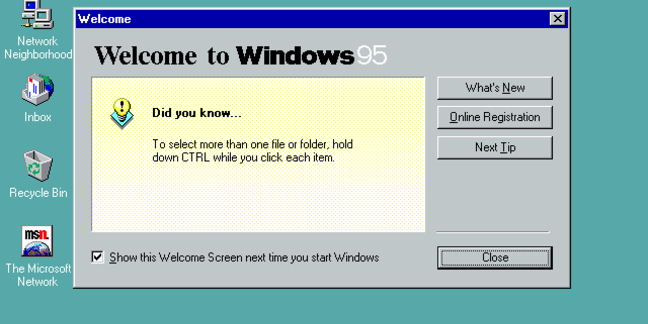 Who, Me? Another week is upon us, and while April continues to be an uncertain beast, we will always have Who, Me?, and another story from the more sinful niche of The Register's readership.

Today's tale comes from "Sam", who whisks us back to his teenage years in the 1990s, and a network of Windows 95 machines in the school library. Doubtless suspicious of what shenanigans the students might get up to, the CD-ROM readers had been disabled, although a single floppy drive remained in each.

The restriction made the loading of "nefarious files", as Sam put it, a tad tricky. "Playing games," he added, "(or in fact, anything not pre-installed on the machines) was strictly forbidden."

Naturally, the gang "saw this rule either as more of a guideline or tool to catch the inexperienced technologist, or as a personal challenge".

They also loved playing computer games, although multiplayer shenanigans were difficult. Dial-up internet was iffy and ridiculously expensive, and lugging CRTs and PCs from house to house required an understanding parent and patience with balky BNC connectors.

But here, at the school, was a ready-made network, replete with hardware beefy enough to run Windows 95. Such gear would therefore have more than enough horsepower for a session on Westwood Studios' Command & Conquer.

For those who have been spared the phenomena of C&C and its seemingly never-ending stream of sequels and expansions, the game was one of the earliest in the multiplayer real-time strategy (RTS) genre and was released in 1995. Based on the company's previous Dune II, the series sold millions and video game giant Electronic Arts snapped up the studio in 1998... before shuttering it in 2003.

While the boys had selected C&C as their game of choice, they did face a formidable foe in the form of The Librarian. "He was," said Sam, "an amicable chap, who would periodically venture into the room to spy people in violation of the rules, asking them politely to close whatever browser game they had fired up, in order to ensure machines were available for students to do actual work."

The other challenge was that C&C was very much a CD-ROM title, and the necessary drives were out of action. Not to be deterred, Sam set about stripping the game of its video and audio fripperies in search of a minimal installation. With the aid of AltaVista and some freeware tools, he reduced the footprint of the game from a 650MB CD down to a mere 5MB.

The disk-spanning feature of WinZip saw that spread over four disks.

"We snuck it onto the computers," he remembered happily, "buried somewhere in the c:\windows folder, and from there were able to propagate it across the network to every machine."

IPX-based tank destruction then ensued whenever the gang were in the library and The Librarian was out of sight. However, there is more to this tale than just the sneaking of a video game onto school property.

The Librarian, you see, knew something was going on by the way the computers would mysteriously reboot when he walked in, "but he was not tech savvy enough to know what to do about it".

The old man therefore called in assistance. "A PFY, a young intern fellow, possibly on some kind of work experience, we could never tell," remembered Sam.

The chap in question was assigned the task of removing all trace of gaming naughtiness from the network, starting with a game called something like "Command".

"In our absence," said Sam, "he logged into each machine, and using Windows 95's 'Find All Files' tool, searched for 'command'." His search bore fruit, and no doubt feeling smug and confident about his entrusted role, he set about deleting the file "command.com" from each and every machine.

"How clever of us to hide it in the System folder."

Those with long memories will remember command.com from their DOS and early Windows days. Also known as the DOS Prompt, it is the first program run after a boot process and executes the autoexec.bat file. It was the default command line interpreter and, most importantly, the vast majority of PCs simply wouldn't start without it.

However, it was also possible to delete it. If deleted, "Windows 95 will, on the whole, continue to operate without issue..." said Sam, "until it's rebooted."

And sure enough, having shut down the computer room as normal at the end of the school day, The Librarian arrived the following morning to find every single machine unbootable, and all displaying "The following file is missing or corrupted: COMMAND.COM."

"There was a fair amount of fallout and the room was shut for two days," remembered Sam.

In the end, Sam's group volunteered a solution to the problem, which The Librarian gratefully accepted. In return, he allowed the youths to play C&C "whenever he was reasonably confident he wouldn't get in trouble for it provided, of course, that we denied his involvement".

"We all gamed happily ever after, and unofficially supported the network until we graduated.

"The intern was, to our delight, never seen again."

Were you that intern? Or maybe you were the ones getting ever more creative in your desperation for some multiplayer mayhem? Tell your story with an email to the team at Who, Me? ®