Google is testing a user-interface change that will hide Chrome extensions by default, which is not going down well with developers.

Instead of allowing extension icons to appear one after another to the right of the omnibox – the input box for URLs and search queries – the Chrome Extensions Platform team is trying out a design change that hides the graphical buttons in a menu accessed by a puzzle piece icon.

The test is called the Chrome Extension Toolbar menu and can be enabled from the Chrome Experiments interface, which is accessible by entering chrome://flags/#extensions-toolbar-menu into the omnibox.

"Our goal with this new UI is to make it easier for users to see what extensions can access their data," explained extensions developer advocate Simeon Vincent in a post to the Chromium extensions forum last week.

"When the user clicks the puzzle piece icon, the extension menu opens and displays a list of all enabled extensions the user has installed. The extension list is grouped by the level of data access the extension has on the currently selected tab."

The current design, on the left, and the proposed jigsaw menu button

Google is in the midst of reworking its Chrome Extension Platform because it is insecure and has been abused by miscreants to steal netizens' information. The point of the Chrome Extension Toolbar experiment is to make the privacy implications of extensions, and the permissions they request, more visible to users.

But if this particular change gets adopted, Chrome extensions themselves will become less visible, upending developers' expectations for how users will interact with their code.

Vincent has advised those who make extensions to rethink user interaction.

"If your extension's action button is a key component of your experience, consider updating your onboarding flow to encourage users to pin the extension to their toolbars," he said. 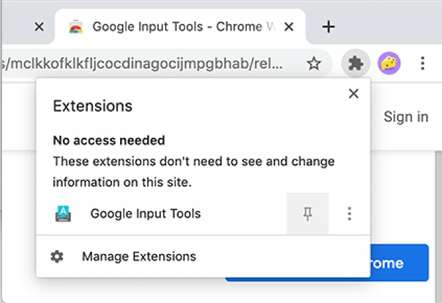 Many of those who have created Chrome extensions assumed users would be able to access extension features directly from the Chrome browser bar by clicking on the displayed extension control. Among those commenting on the change in the Chromium extensions forum, most expressed opposition to the altered interface and on-boarding experience.

"This seems like a huge misstep," wrote Robert James Gabriel, founder of Helperbird, an accessibility extension. "I deal with a lot of kids and schools with my business. Ninety-nine percent will not pin unless we can do it on install."

The risk for programmers is that extensions hidden by default will be forgotten.

"I completely agree with everyone else's sentiment, hiding icons by default seems like a terrible user experience and will cause many more issues than it fixes," wrote Evan Carothers, founder of recruiting and sales extension ZapInfo. "The excuse of keeping the UI uncluttered makes no sense considering the users are opting to install these extensions."

Carothers argued it would be better to continue pinning extensions by default and to provide users with an option to unpin if they really can't deal with the clutter. To do otherwise, he contended, will limit extension usage and adoption.

Chrome extension makers, however, may have to get used to a shorter leash. Anticipating how Google's security and privacy-focused platform changes will prompt extension users to be more cautious in granting access permissions, Vincent said developers should plan for more restrictions. "Be prepared for your extension to not have the host permissions you expect," he said. ®