The 25 Gigabit Ethernet Consortium has decided to ditch its name as it heads off in search of serious speed.

The Consortium on Monday announced the change and explained that it was founded to develop 25, 50 and 100Gbps Ethernet, but as it has knocked those off and now has an 800Gpbs spec to share the name doesn’t fit well any more.

“Ethernet is evolving very quickly and as a group, we felt that having 25G in the name was too constraining for the scope of the consortium,” said Brad Booth, chair of the Ethernet Technology Consortium. “We wanted to open that up so that the industry could have an organization that could enhance Ethernet specifications for new and developing markets.”

The group’s membership and mission remain the same. Arista, Broadcom, Cisco, Dell, Google, Mellanox and Microsoft remain as “promoters”, with another 40-odd companies also signed up and they’re still all pursuing Ethernet standards.

To mark the new name, the group has drawn attention to the early March 1.0 800G specification [PDF] that details its next step in Ethernet’s evolution. And here it is! 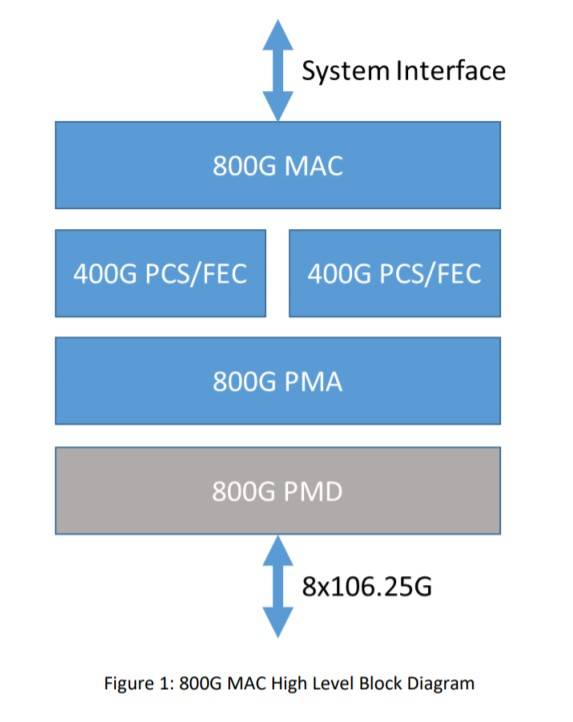 The spec says: “800Gb/s Ethernet technology is designed as an interface that uses eight 106 Gb/s lanes using a 2xClause 119 PCSs (400G) to connect a single MAC operating at 800 Gb/s (though the 400G PCSs are modified, this is just a very high level conceptual view). The … figure shows the high level architecture. Note that at least for now, we are not defining an 800G PMD in this specification. 2x400G PMDs could be used to form an 800G interface, for instance 2x400GBASEDR4 modules, though skew needs to be managed to be within the specification. This architecture could support 8x106.25G, 16x53.125G or even slower interfaces, but the 8x106.25G is the main focus.”

There’s no word on when the spec will appear in products, but the way this sort of thing usually goes is that one of the participants bakes a new spec into product that’s usually of most interest to buyers with a tolerance for pain, deep pockets, and a lot of data that needs shifting in a hurry. The rest of us get it years later, when 800Gbps-requiring workloads become more common and kit gets cheaper and more reliable. Or perhaps this one will just disappear into clouds and telcos, and the rest of us will benefit from it without ever having to dirty our hands. ®