Watch out, everyone, here come the Coronavirus Cops, enjoying their little slice of power way too much 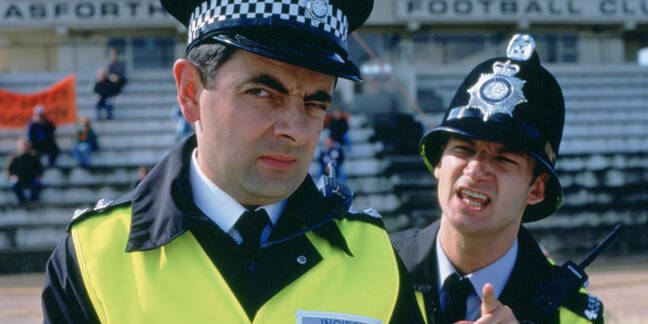 Comment There's a reason why the UK doesn't have a mandatory national ID card despite numerous efforts by the authorities to impose one: it's because Brits can't stand the use of petty power.

But that urge, the drive of curtain-twitching, council-calling busybodies to triumphantly impose their will is still there, just waiting for an opportunity – and the COVID-19 coronavirus is a fountain of it. Unfortunately they are now being aided and abetted by the local boys and girls in blue.

Police in Cambridge are about to unleash an army of box-ticking, nosy neighbours to make life a misery for their fellow humans.

"We have now developed an online form allowing you to report individuals breaching COVID-19 restrictions via our website," the force proudly announced this week. It provides a link that goes directly to a frustratingly simple form that has even been optimized for mobile phones, just to make it that little bit easier to report on next door.

As if it wasn't bad enough having to stay stuck inside with your home, confined with people you've already spent way too much of your life in close proximity to, you now have to worry that that one time you actually give yourself a break, and get some fresh air outside – safely keeping your distance from everyone, definitely not going out if you have any symptoms of the illness, and wearing face protection as necessary – bored Betty or tedious Tim down the end of the street is going to dob you into the plod regardless.

The one good thing about the form is that at least it'll stop these busybodies from calling 999 or 101 all the time, hogging the line during real emergencies, but still, someone has to read the petty reports.

You may also have seen the Derbyshire Police's proudly posted drone footage of people miles away from anything walking in the countryside, getting a lungful after days of being stuck in the same house.

Rather than celebrating the fact that Derbyshire is able to accommodate that behavior, with its huge tracts of land and majestic hills interspersed with walking paths, the Old Bill saw only infringements. So outraged were they by the criminal act of people strolling and relaxing that they even got Dave in the back office to use his HNC in graphic design to add some Jason Bourne-style targeting circles and tags.

"Walking your dog in the Peak District," reads the black-on-white overlay closely followed by an orange swipe of tut: "Not essential." The drone keeps flying. And down there, look closely, you can just about see a man walking.

The subsequent effort to shame him even recognizes the fact that the chances of this isolated bloke spreading the virus is basically zero. What do you mean you can't see him? Follow the white line. Got him? Good: "Going for a walk miles from home. Not essential."

"The government advice is clear," the video notes near the end. "You should only travel if it is essential." It then closes with the frankly baffling message: "We are all in this together."

Well, clearly we're not all in together because while some people are making sure they get some fresh air in the best possible way – far, far, far away from others – there are those, looking at you, Derbyshire Police, who are wasting their time and people's taxes flying drones around trying to catch people in an act that they feel absolutely no guilt about. And then editing it, posting it online, and expecting people to congratulate them for it.

If the authorities want to practice some coronavirus tracing, they should track down whichever idiots were involved in the making of the video and isolate them from the rest of society for the next 10 years or so.

What are the cops going to do with all these web reports, anyway? Do they honestly expect to get valuable intelligence that leads them to the capture of the infamous corona stroller who refuses to step into the road to give people a six-foot gap?

If there is any consolation, it's that the cops in some parts of America are infinitely worse. Forget drones and online forms, New York City badges are wandering around arresting people for being too close together, and then putting them even closer together in cells.

The horrible irony is that this kind of unnecessary police enforcement is causing officers to fall sick at a startling rate: more than 1,000 officers have tested positive, producing a 3.8 per cent infection rate compared to 0.5 per cent across the Big Apple as a whole.

Presumably they will just start shooting people. So far at least no bullets have been found with COVID-19 on them. ®

But industry is sceptical hybrid network tech will cut it

Looking for a new IT gig? Here are vacancies around the world for developers, cloud engineers, infosec analysts, Jira admin, and more

Job Alert Advertise your open positions here for free, no catch, and find opportunities within

Have you appointed your designated droner?

Shies away from DoT demands for Fenland revenue

Cambridgeshire snuggles up to NTL

Cambridgeshire cops get coy with FOI