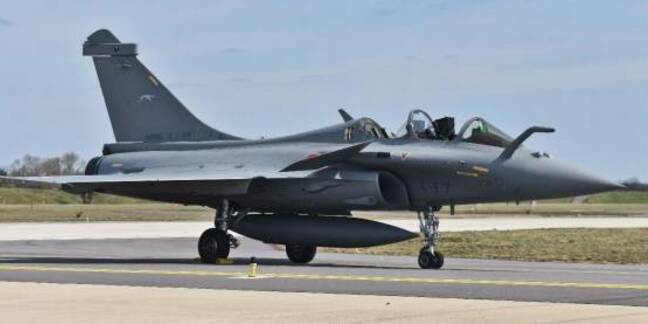 The Rafale-B jet from which the unfortunate Frenchman got to experience parachuting as well as flying. Note smashed cockpit canopy. Pic: BEA-A

An elderly and reluctant Frenchman was ejected from a French Air Force fighter during a retirement day jolly – and narrowly missed taking the pilot with him, an investigation report littered with unintentional howlers has revealed.

The unnamed 64-year-old was éjecté from the two-seat Rafale-B from a height of 2,500ft in March last year after grabbing his ejection seat handle to steady himself, France's BEA-E aviation investigator concluded.

Although the BEA's full report is in French [PDF], aviation news website Aerotime Hub translated and summarised its contents, revealing the full comedy of errors triggered by a group of enthusiastic colleagues hoping to give their workmate a send-off to remember.

As he was an employee of a defence contractor, the pensioner's bosses had no difficulties asking the French Air Force to let him into the back seat of one of its Dassault Rafale fighter jets as a surprise retirement gift. Nonetheless, the unfortunate Frenchman had "never expressed a desire to carry out this type of flight and in particular on Rafale", which didn't stop his colleagues luring him to Saint-Dizier air base anyway.

The flight itself was a routine military training sortie for three Rafales, carried out in perfect weather. Our pensioner, heart pounding at "between 136 and 142 beats per minute" (as recorded by his smartwatch), underwent a quick medical exam from a doctor four hours before being shown by the pilot how to put on his safety gear. Unfortunately, no one properly checked him as he clambered into the cockpit – meaning "his [helmet] visor was up, his anti-g pants were not worn properly, his helmet and oxygen mask were both unattached, and his seat straps were not tight enough."

Nonetheless, a mechanic gave them both a cursory check, strapped a Go-Pro to an approved bulkhead mounting point so the hapless passenger's gurning would be preserved for all time, and nodded to the pilot to close the transparent cockpit canopies.

Things got worse when the pilot took off from northeastern France's Saint-Dizier Robinson airbase. Rather than the gentle ascent at 10°-15° that airline passengers experience, the Frenchman at the Rafale's controls carried out a typical fighter jet departure and "climbed at 47°, generating a load factor of around +4G. Then, as he levelled off, he subjected his passenger to a negative load factor of about -0.6G".

Forces exerted by Britain's most G-force-intensive roller coaster, Alton Towers' Rita, max out at +4.7G – or four times the normal force of gravity.

Our pensioner, loose in his straps, not really wanting to be there and totally unused to being flung around like a rag doll, reached out to grab something and hang on for dear life. He picked the worst possible handhold: the trigger handle for the ejection seat. After the customary loud bang and whoosh he ceased to be part of the jet's payload, with the force of the ejection tearing his unsecured helmet and mask from his face.

The Rafale-B's command ejection system is meant to fire both seats if one of the crew pulls the handle. A very confused pilot, however, was still sitting in his newly canopy-free Rafale wondering what the hell had just happened. He returned to land, conscious all the time that the seat could fire at any moment without warning. Luckily, it didn't go off.

Both the pilot, his reluctant (and probably now aviation-phobic) passenger and the aircraft all landed safely.

"The passenger said he had a complete lack of knowledge of the aeronautical environment and its forces, having never flown on a military aircraft. The surprise effect associated with a lack of military aeronautical experience therefore resulted in creating and maintaining significant stress for the passenger throughout the morning," concluded a sympathetic BEA-E, which found that "the margins of decision left to the passenger to possibly refuse the flight are perceived as almost nonexistent".

The French Air Force has enjoyed some unusual jet-related events in the near past, including the tale of a general caught using a training jet as a personal air taxi to his Provence mansion every weekend. ®