COVID-19 is pretty nasty but maybe this is taking social distancing too far? Universe may not be expanding equally in all directions

The universe may not be expanding at the same rate in all directions according to a study backed by the European Space Agency – a possibility that has left cosmologists asking themselves some serious questions.

The cosmological principle rests on the idea the universe is both homogeneous and isotropic. In other words, it looks pretty much the same from any point when viewed across large enough scales.

The cosmic microwave background radiation, for example, appears to be spread uniformly across space-time. And the spatial distribution of galaxies is believed to be statistically the same, too, over hundreds of millions of light years. It also means the expansion rate of the universe is the same regardless of whichever direction you're looking at the sky.

However, a paper published on Wednesday in Astronomy & Astrophysics casts doubt on that widely accepted hypothesis. A team at the University of Bonn, Germany, and America's Harvard–Smithsonian Center for Astrophysics, claim to have discovered hundreds of galaxy clusters that appear brighter when viewed in a particular direction.

“Together with colleagues from the University of Bonn and Harvard University, we looked at the behaviour of over 800 galaxy clusters in the present universe," said Konstantinos Migkas, first author of the paper and an astrophysics PhD researcher at Bonn.

"If the isotropy hypothesis was correct, the properties of the clusters would be uniform across the sky. But we actually saw significant differences."

"We saw that clusters with the same properties, with similar temperatures, appeared to be less bright than what we would expect in one direction of the sky, and brighter than expected in another direction," said Thomas Reiprich, co-author of the paper and a cosmology professor at Bonn.

"The difference was quite significant, around 30 per cent. These differences are not random but have a clear pattern depending on the direction in which we observed in the sky." 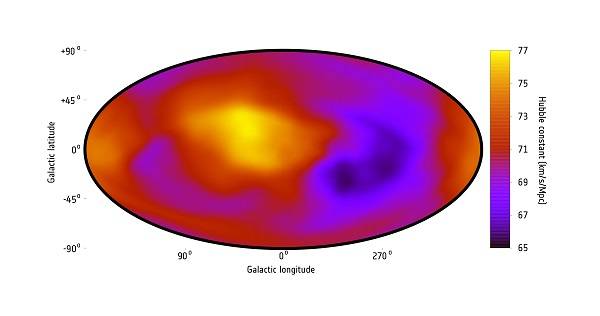 The Hubble constant, an indicator of the rate of expansion, is lower for the observed galaxies on the right side of this diagram compared to the left. The bright spot in the middle appears to be expanding faster. Imafe Credit: K. Migkas et al. 2020

At first, the team thought the irregularities were caused by a difference in gravitational pull exerted between the clusters of galaxies, or that some appeared dimmer because they were obscured by clouds of dust and the like. But there is little evidence of this, and the result has taken them by surprise.

“If the universe is truly anisotropic, even if only in the past few billion years, that would mean a huge paradigm shift because the direction of every object would have to be taken into account when we analyse their properties," said Migkas.

"For example, today, we estimate the distance of very distant objects in the universe by applying a set of cosmological parameters and equations. We believe that these parameters are the same everywhere. But if our conclusions are right then that would not be the case and we would have to revisit all our previous conclusions."

Not everyone is convinced, however. René Laureijs, a project scientist working on the Euclid mission at ESA, recommended repeating the study using more galaxy clusters.

"The findings are really interesting but the sample included in the study is still relatively small to draw such profound conclusions," he said. "This is the best one could do with the available data, but if we were to really rethink the widely accepted cosmological model, we would need more data."

The boffins aren’t quite sure why one side of the galaxy clusters is brighter than the other. They have a sneaking suspicion it’s due to the dark energy, which is mysterious stuff that has been linked to the universe’s rate of expansion.

ESA’s Euclid spacecraft could help the team answer that question: it will map the effects of dark energy on 3D distributions of galaxies. Euclid is expected to launch some time in 2022. ®

Whichever way you look it's all exactly the same, boffins confirm

H0LiCOW: Cosmoboffins still have no idea why universe seems to be expanding more rapidly than expected