Doom Eternal: Reboot sequel is cluttered but we're only here for the rippin' and the tearin'

In which case, it'll do

The RPG Greetings, traveller, and welcome back to The Register Plays Games, our monthly gaming column. What a time to be childless, huh? You young, care-free things have stacks of box sets and video games to plough through while we're all stuck indoors fearing for our lives and those of our loved ones. Unfortunately, my lockdown has been busier than usual as childcare is closed too, which is why we're weeks late. But hey! A long weekend! Maybe it's the perfect time to check out Doom Eternal.

Doom needs no introduction and its importance to both gaming and gamers cannot be understated. Everyone remembers where and when they first navigated those dingy demon-infested corridors or, indeed, nearly downed the company network playing it. Myself? I first clapped eyes on the Doom II: Hell on Earth CD-ROM in my late grandfather's study, mid-'90s, when I was far too young, the cyberdemon looking metal as fvkk on his chaotic desk.

Grandad was on the team that in 1970 developed the world's first implementation of a compiler for Algol 68-R, among other boffinry, at the Royal Signals and Radar Establishment in Worcestershire (I like to think he would have got a kick out of The Reg) so I'm assuming that basically anyone with a computer in the '90s had a copy lying about.

The first game in 1993 – along with its more simplistic Nazi-fragging predecessor, Wolfenstein 3D, also developed by id Software – set the tone for a whole genre: first-person shooters. id, of course, later graduated to the much-loved Quake series, but Doom spawned a horde of clones – Duke Nukem 3D, Heretic and Hexen to name but a few. Heck, almost a decade later, even Halo's protagonist, Master Chief, had a generic resemblance to Doomguy. 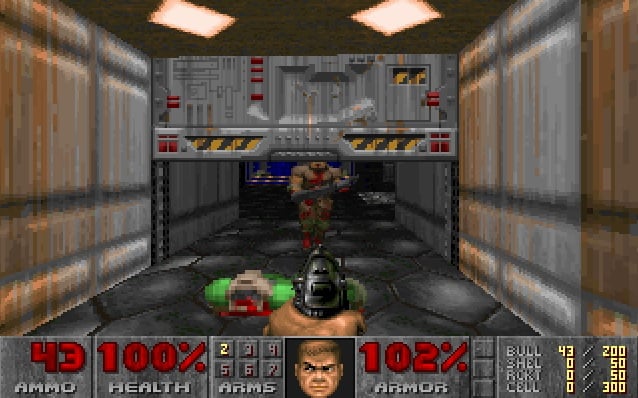 For one sweet moment, I'm home

But the golden age of hilariously ultraviolent, run-and-gun shooters didn't last. With graphical advances, the genre gradually got more po-faced. GoldenEye on the N64 was a homage to scenes from the Bond film, the Second World War became a popular theme (Medal of Honor, Battlefield, Call of Duty) and Half-Life had a strong focus on narrative. Mechanics like aim down sights, crouching, and peeking became more common. Gone were the days where you unthinkingly shredded anything that moved. It all got a bit too cerebral. With Doom, I never stopped to ask why I was on Mars or Phobos or whatever, nor why demons had invaded. All I knew was I had a delightful assortment of weapons with which to dispatch them. That's all that mattered.

Escape From Tarkov: Hardest of the hardcore looter-shooter is spellbinding despite the punishing learning curve

I never played Doom 3 (2004), the first "proper 3D" game in the series, but caught my dad on it a couple of times. As a super-grimdark, realistic attempt, the trajectory of shooters of the time had likely rubbed off on it. Though critically acclaimed, I've always been told not to bother if I liked the original spirit.

Which is why the soft reboot in 2016 was equally dreaded and anticipated – with id at the helm again and Bethesda publishing, so much could go wrong. I jumped in because "fuck it, it's Doom" and I'm glad I did. Though shooters are by no means my favourite genre, it dragged that old-school style kicking and screaming into the 21st century with quality gameplay, recognisable enemies and weapons, and cranked the breakneck pace to 11 while maintaining a hands-off minimalism around storytelling. 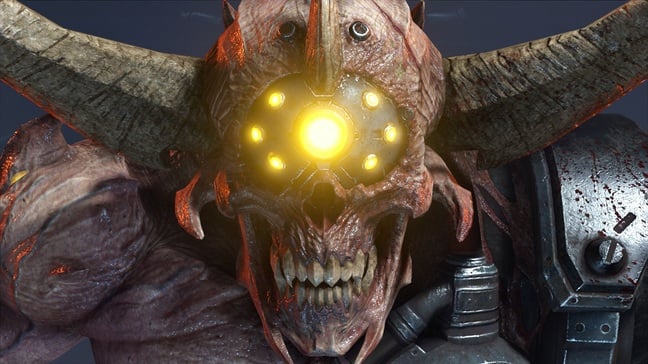 The Doom Hunter, one of the boss encounters

So here we are in 2020, amid a catastrophic global pandemic and billboards looming down over empty streets proclaiming "DOOM ETERNAL". You might think it was in bad taste if the original late 2019 release date hadn't already been delayed to 20 March. Once again you take up the mantle of the Doom Slayer, or "Doomguy" as fans call him, the nameless marine from the earliest games, only since the reboot he's been portrayed as some sort of fabled godlike warrior bent on protecting humanity from demonic incursions, which, much like the first two games, have this time moved from Mars to Earth. 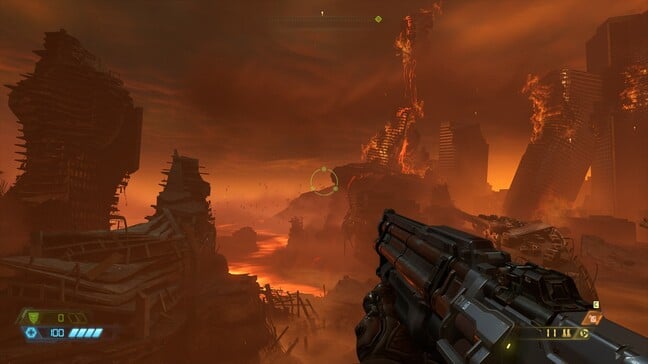 The various hellscapes are breathtaking

That's one of the most striking differences between Eternal and 2016 – the latter set you off on your adventure with smatterings of dialogue and text that you could pay attention to if you wished, but the former rams a sci-fi/fantasy odyssey down your throat through multiple cutscenes, 20ft holograms, and stacks of "lore" that can be found scattered around each map. Aliens, ancient galactic orders, alternate universes… blah blah blah. Despite Eternal's fleshed-out world, I had a hard time caring about what any of it meant and found myself asking, "Who are you and does it matter?" I'm only here for the rippin' and the tearin', to paraphrase Doomguy himself in the 1996 comic book based on the game… and this weirdo at a Jamaican sex resort. 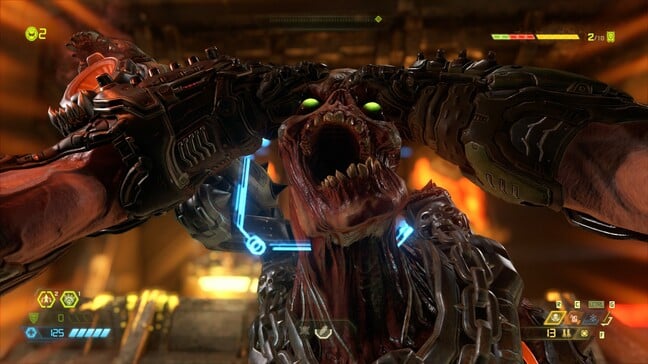 When you think you've seen all the 'Glory Kills', they'll throw another at you (blue thing is health)

Fortunately, the twitchy gameplay does provide an ample amount of rippin' and/or tearin'. The gory "Glory Kills" – probably the best thing brought over from Doom's 2016 return – allow the player to manually finish off a weakened enemy with the tap of a button and a wonderfully explicit animation to gain some health back. A load more mechanics from the previous game also reappear, though this time you have them all at your fingertips from the beginning. Mobility is a much bigger deal as Doomguy can still run at 60-odd miles per hour, but with the ability to double jump and make evasive dashes on the ground or in the air, which is crucial as being difficult to hit helps turn the tide of the hectic battles. Standing still and taking shots at a distance means a swift death – your foes will close the gap. 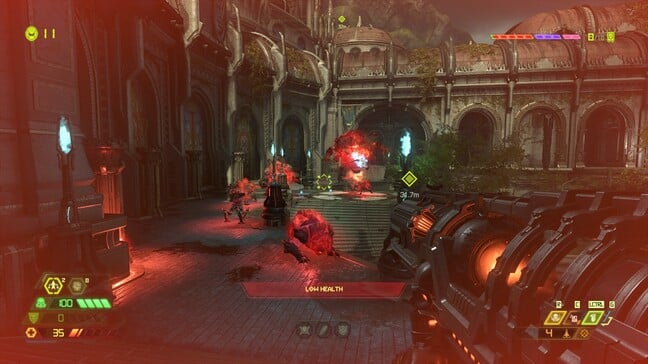 Combat follows the established blueprint of ambush-laden corridors leading to open, arena-like areas, which are locked down until the demonic presence has been thoroughly stomped, allowing you to progress. The 13 levels have an outwardly complex appearance, but thanks to the cluttered, unusually gaudy HUD (for a Doom game), you'll never be lost with Bethesda's omnipresent quest marker, like something straight outta Skyrim. However, pushing ahead isn't always simple and you'll need to make use of those fancy jumps and verticality to surmount frequent platformer-esque obstacles and puzzles. You can now grab onto walls and leap to other climbable surfaces too, which often leads to uncovering map secrets – another staple of the series – if you are so inclined. 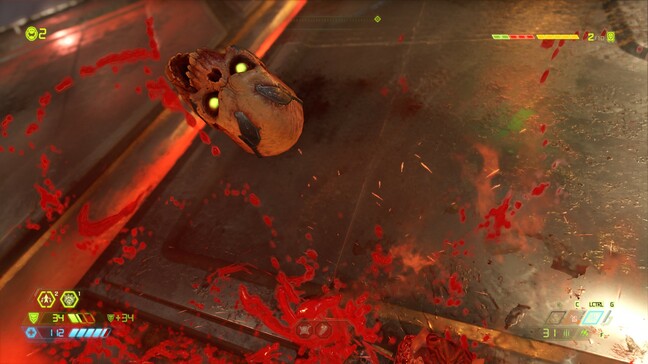 He was trying to (guffaw) GET A HEAD

Your arsenal becomes more deadly as you pick up both familiar and new weapons, with a total of eight discovered through the course of the game – not including the "secret" Unmaykr, which rivals the iconic BFG in destructive power and can only be unlocked by completing all Eternal's Slayer Gates, bonus stages with challenging encounters. You need to find the key to each before you can tackle them, however. 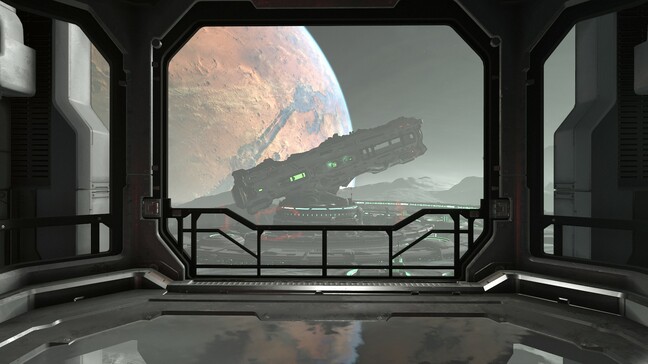 Strangely, there's no infinite-ammo pistol in Eternal, which makes the combat shotgun the starter weapon. Six can be modified, with two firing modes each to switch between depending on what the situation calls for. Some demons now have weak spots or are particularly susceptible to a specific mod, for example. There are also two varieties of grenade, explosive and freeze, which can also be toggled on the fly. 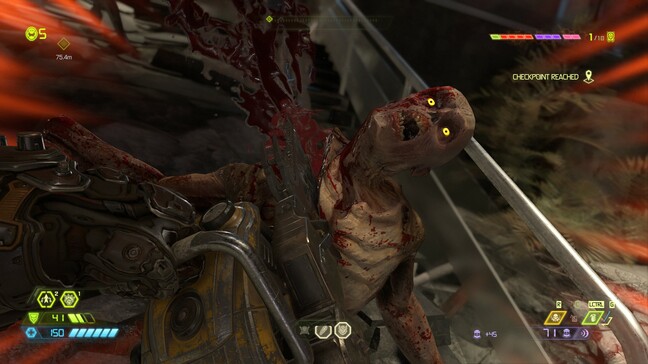 How do you like your death? Sliced or chunky? The chainsaw provides

The trusty chainsaw returns in its 2016 guise except – again – you have it from the beginning. As long as you have sufficient fuel, it will one-shot enemies causing their bloodied chunks to spew out ammo, health and armour. This is helpful because, with such small ammo reserves for each weapon without upgrading, you are constantly running out, making use of the chainsaw obligatory. Whether this is just to force the cool disembowelment animations on the player is unclear. Either way, it's an odd and at times frustrating design choice. 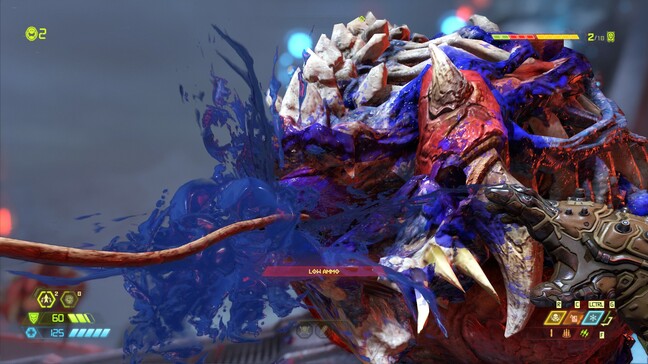 Yanking the eye out of an old frenemy

Oh yeah, almost forgot – a shoulder-mounted flamethrower will stagger demons and make them rain armour shards. Handy for getting out of tight corners. But this is the thing about Doom Eternal – there are just so… many… mechanics. It takes some practice learning how to effectively use them all because you simply forget some exist, despite the game feeling like it pauses for a tutorial on each every five minutes, making for a jarring first couple of hours. You can also upgrade your "Praetor Suit", improve your weapons and unlock perks with resources collected in-game. 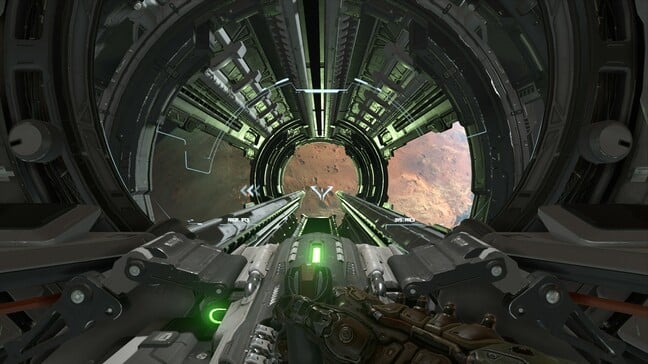 With apologies to Mars

If Doom 2016's approach was minimal maximalism, Doom Eternal is layer upon layer of cruft, inside and outside the actual gameplay. Outside, in the menus, Eternal is bloated with "Unlock this! Unlock that! This much XP to get this cosmetic!" etc. Another peeve is that you have to register an account with Bethesda.net before you can do anything. It's a symptom of AAA games at the moment and I don't care for it. These things are probably to benefit the multiplayer game – an asymmetrical mode where you can play as one of Doom's many monsters against a single marine if that tickles your pickle – but in all likelihood the franchise's veteran fans are more interested in the campaign than being dicked on by a tweenager. 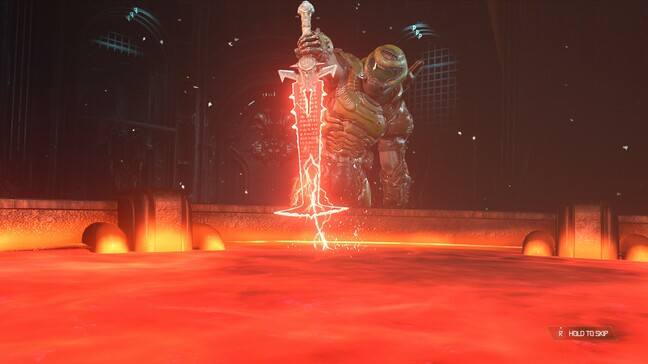 Some of the new weapons are admittedly pretty badass

However, Eternal's big budget has done it some favours. As with the prior title, it runs like an absolute dream on PC. Having copped a pretty stable 60FPS with graphics on highest for Doom 2016 despite running a dated GTX 970 and monitor at the time, I whacked everything up to "ultra-nightmare"* (ho ho) on Eternal and my RTX 2080 returned a consistently buttery 144FPS hellscape.

Somehow these visually stunning games are really, really well optimised – so if your mouldy hardware is giving you pause for thought, I'd wager that a middling GPU no more than five years old could probably squeeze satisfactory performance out of Eternal. But don't quote me on that, it's just an observation based on experience that obviously doesn't apply to console owners. 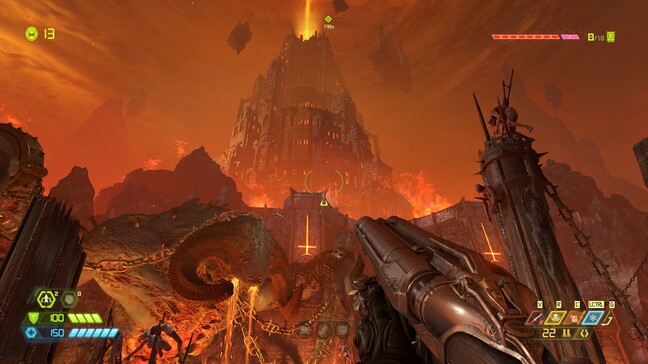 Can I get a Hell yeah?

Standing on its own two feet, Doom Eternal is a remarkably well-made game that is a lot of genuine, caveman fun when you dig into it, though I found that I couldn't "sesh" it as hard as I would other things. Shooters really only have one ace up their sleeve and that is, unsurprisingly, clicking things till they die. An hour a pop would usually be enough to sate my bloodlust, which is convenient since a first playthrough of each level takes about the same amount of time – just right for the casual or busy gamer. Besides, I tend to prefer nerdier crossovers when it comes to hosing baddies with hot lead. A nod should also be made to the game's cybergoth Nine Inch Nails-meets-Meshuggah-meets-ridiculously djent-y industrial metal soundtrack, which makes those "Blood Punches" – another mechanic I forgot existed – hit all the harder.

The problem Eternal has is Doom's legacy, and viewing it through rose-tinted nostalgia goggles is unavoidable, particularly when the game immediately before it already did such a great job of living up to the name. But if you're jonesing for a modern shooter, this may prove to be the year's best. ®

* "Ultra-nightmare" is also the hardest difficulty setting in Doomland. Before you ask, no, I did not play it on ultra-nightmare. "Hurt me plenty" was hard enough, to be honest. All screenshots on highest settings, but with motion blur disabled.