Global PC sales fell markedly in Q1 2020, but that may not be an entirely bad thing.

While the three analyst firms that release PC shipment data early in each new quarter disagree on the extent of the shipment slump and its ramifications, each has nasty numbers to share. In alphabetical order:

Whatever the number, it was the lowest for several years (all three analysts' numbers are at the bottom of this story).

All three firms agreed the slump was caused by a certain virus giving the global supply chain a kicking, although the end of a PC buying cycle caused by the end of support for Windows 7 also dragged demand down. A shortage of Intel parts didn’t help matters either.

Canalys and Gartner say Apple got the worst of the supply chain situation, with Mac shipments down by a tick over 20 per cent. HP and Acer each copped shipment declines of around 13 or 14 percent. Lenovo’s supply chain proved more resilient than most, but still led to shipment slippage.

Dell was the only vendor to increase shipments year-over-year, but even then only by a point or two. Which anyone will take in the current climate.

Opinion was mixed on whether this was all bad news for PC makers, because they were able to charge higher prices for the product they could ship. IDC opined that recent events have given consumers a reminder that PCs are important, which will mean better future sales. Gartner said businesses are more likely to sweat their PCs to save cash and focus on priorities revealed by the current crisis. Canalys had a bet each way, suggesting that businesses will hoard cash and households have gone through an upgrade cycle.

The Register suspects the best prediction is that everything will be hard to predict for the foreseeable future! ® 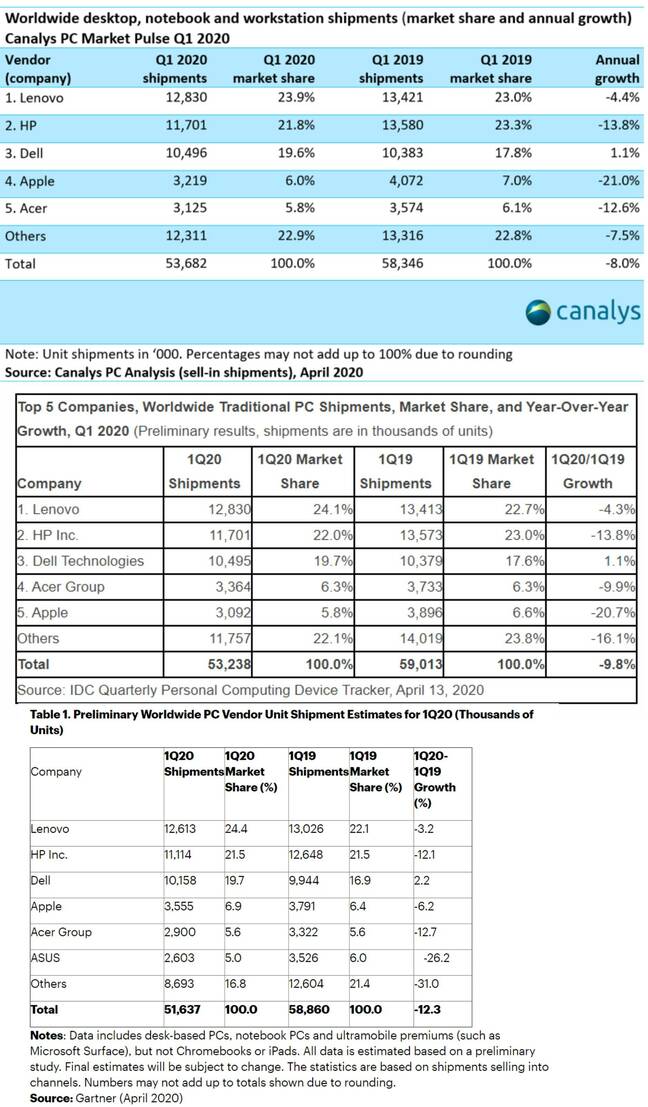