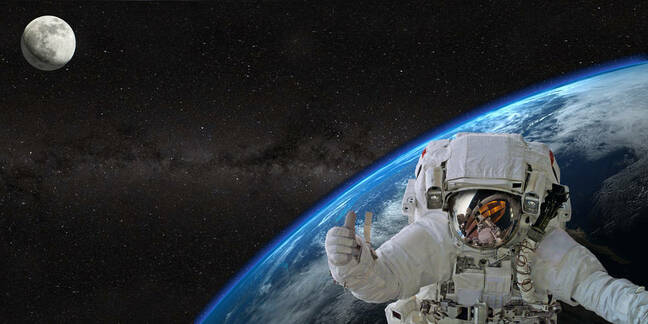 Prolonged periods in space increases brain mass by as much as 6 per cent, according to a new study, but that's not good news.

Boffins checking NASA astronauts noted the increase in their brain's white matter – the bundles of nerves that make up the inner workings of the human mind. It seems that living in constant freefall does strange things to human minds.

The researchers discovered that the volume of white matter had increased by about six per cent for eleven astronauts that had spent over 170 days living in the International Space Station. All participants in the study underwent MRI scans before and after spaceflight, they were monitored a day after they returned as well as 30, 90, 180, and 360 days after.

The team isn't quite sure how extra white matter causes the brain to fill with fluid. Kramer speculated that it could be down to the enlargement of ventricles within the white matter allowing more fluid to pass through the brain, which adds more pressure on the optic nerve.

"I believe there is a common mechanism by which the white matter and the ventricles expand," Larry Kramer, lead author of the paper published in Radiology on Tuesday and a professor of diagnostic and interventional imaging at the University of Texas Health Science Center, told The Register.

"This is potentially due to dysfunction of water transport in microgravity. Cerebral spinal fluid which is generated in the lateral and third ventricles and which migrates through the white matter accumulates due to this dysfunction."

Kramer told El Reg that the researchers aren't sure how having more white matter could affect cognitive abilities. "We don't know at this time but it will be a subject of interest in upcoming research proposals. We have in a previous study showed that white matter is highly organized in astronauts most likely related to their rigorous training."

Rewriting the checklists: 50 years since Apollo 13 reported it 'had a problem' – and boffins saved the day

The team is trying to combat the effects of zero gravity to prevent the buildup of cerebrospinal fluid in space to help astronauts safely embark on longer spaceflights to regions that have never been explored before.

"We are working on countermeasures [exploring ideas like] artificial gravity or lower body negative pressure to see if we can prevent changes that are occurring in the brain and eye of astronauts. Now that we documented these changes we can better determine if we can prevent or slow the development of these changes during long-duration space missions such as the planned trip to Mars," Kramer concluded.

The research could explain why the effects of zero gravity on the brain continue long after astronauts have returned to Earth.

Battling solar radiation, bad food, and social isolation is bad enough in space, but the problems don't miraculously disappear when you return home. A lot of astronauts report bloodshot eyes and blurry vision, symptoms associated with pressure exerted by fluids pushing up against the skull and brain tissue.

"That movement of fluid toward your head may be one of the mechanisms causing changes we are observing in the eye and intracranial compartment," Kramer explained. In space, the lack of gravity pushes the fluid towards the top of the head.

But why does the pressure continue even when the astronauts are back on Earth? Kramer and his colleagues from NASA's Johnson Space Center, the University of Michigan-Ann Arbor, the Memorial Sloan-Kettering Cancer Center, and KBR, a private engineering and construction company, reckon it's because the total volume of white matter in the explorer's brains has grown.

"What we identified that no one has really identified before is that there is a significant increase of volume in the brain's white matter from preflight to postflight," said Kramer. "White matter expansion in fact is responsible for the largest increase in combined brain and cerebrospinal fluid volumes postflight." ®