Astronomers have uncovered a new exoplanet that's roughly the same size as Earth and lies within its star's habitable zone 300 light years away after checking for software errors.

The images, collected by the now-defunct Kepler space telescope, show a rocky planet – dubbed Kepler-1649c – that is only six per cent larger than the Earth and well within the so-called Goldilocks Zone where liquid water could exist. It orbits a red dwarf, so only gets about 75 per cent of the solar energy we do, and spins around its star so fast a year lasts just 19.5 days. 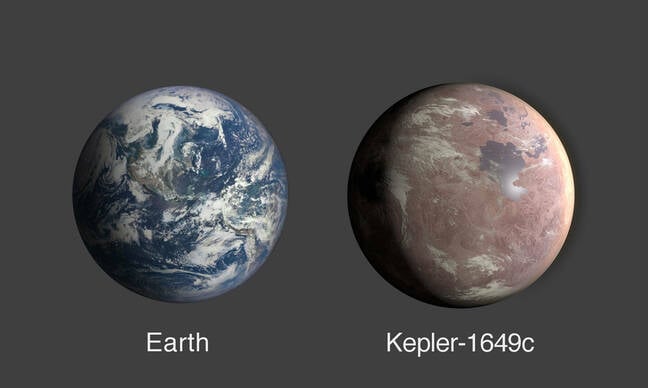 NASA boffins devised a software system dubbed Robovetter to handle the vast amount of data Kepler generated. The software looked for the telltale dip in a star's brightness as a planet passed in front of it. Known as the transit method, it's biased towards finding giant exoplanets that lie close to their parent stars.

But code can make mistakes, and NASA set up the the Kepler False Positive Working Group, which goes over the past data. A team of researchers led by the University of Texas at Austin stumbled across the gem when they decided to look over data and found Kepler-1649c, but not after questioning the evidence.

The periodic dip in brightness isn't always caused by exoplanets, Jeffrey Coughlin, co-author of the study published in the Astrophysical Journal Letters earlier this month, and the director of the K2 science office at the SETI Institute, explained.

"There are an incredibly large number of signals in the initial detection stage that aren't due to planets, such as those due to variable stars and spurious noise from Kepler's electronics."

"It took us years of studying these signals in-depth to gain the human expertise to distinguish them reliably, and then years more to write the computer algorithms to do it automatically," he added. The algorithm labelled Kepler-1649 c as a "false positive" and decided the object was not an exoplanet. The researchers quickly realised the software's error and saw that the data did, in fact, point to a new world.

Kepler-1649c has a neighboring planet further out from its star. The pair exert an orbital resonance ratio of nine-to-four, meaning that every time the more distant planet completes four orbits, Kepler-1649c has circled its star nine times.

The nine-to-four configuration is uncommon, and suggests that not only is the planetary system stable, it might even contain a third planet too. The researchers haven't seen any signs of another planet yet, however, it may be too small to detect at the moment.

"Out of all the mislabeled planets we've recovered, this one's particularly exciting – not just because it's in the habitable zone and Earth-size, but because of how it might interact with this neighboring planet," said Andrew Vanderburg, first author of the paper and a researcher at the University of Texas at Austin. "If we hadn't looked over the algorithm's work by hand, we would have missed it."

"In terms of size and likely temperature, this is the most similar planet to Earth that has ever been found with Kepler. It's incredible to me that we just found it now, seven years after data collection stopped on the original Kepler field. I can't wait to see what else might be found in the rich dataset from Kepler over the next seven years, or even seventy," Coughlin added. ®