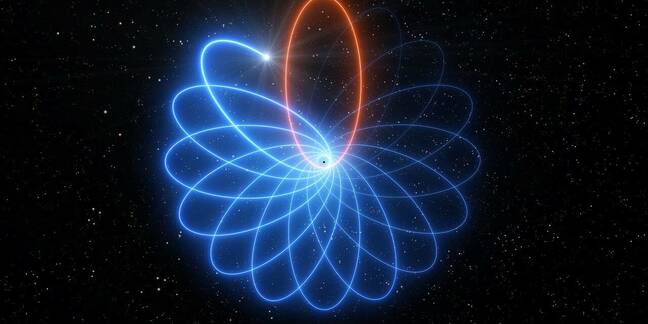 Astronomers have observed a star tracing a rosette shape in its orbit around a supermassive black hole for the first time, an effect that provides further proof of Einstein's Theory of General Relativity.

The international team of researchers known collectively as the GRAVITY collaboration painstakingly mapped the star's position with a variety of instruments at the European Space Observatory's (ESO) Very Large Telescope over 27 years.

"Einstein's General Relativity predicts that bound orbits of one object around another are not closed, as in Newtonian Gravity, but precess forwards in the plane of motion," said Reinhard Genzel, first author of the study published in Astronomy & Astrophysics, and Director at the Max Planck Institute for Extraterrestrial Physics, Germany.

The motion requires a little technical knowledge to understand. As the star – S2 – orbits the supermassive black hole – Sagittarius A* – it passes two points that brings it closest to the void, known as the periapsis, and farthest from it, known as the apoapsis. The line that connects both the periapsis and the apoapsis slowly rotates over time as S2 moves through Sagittarius A*'s massive gravitational field, making its orbit rosette-shaped.

"This famous effect – first seen in the orbit of the planet Mercury around the Sun – was the first evidence in favour of General Relativity. One hundred years later we have now detected the same effect in the motion of a star orbiting the compact radio source Sagittarius A* at the centre of the Milky Way," Genzel added.

Known as the Schwarzchild precession or the apsidal precession, the motion had never been detected with a star around a black hole before. Although numerous clusters of stars orbit Sagittarius A*, S2 stands out due to its tight orbit that brings it closer than 20 billion kilometers from the black hole. As it nears its closest approach to the monstrous void, it travels at almost 3 per cent of the speed of light. The small orbit and fast motion means that S2 completes an orbit once every 16 years.

Sagittarius A* is located 26,000 light years away from the Sun, and is estimated to be four million solar masses. The measurements gathered from ESO's VLT don't just confirm Einstein's General Theory of Relativity, however, they will help the GRAVITY collaboration study dark matter and how supermassive black holes like Sagittarius A* evolve over time.

"Because the S2 measurements follow General Relativity so well, we can set stringent limits on how much invisible material, such as distributed dark matter or possible smaller black holes, is present around Sagittarius A*," said Guy Perrin and Karine Perraut, co-authors of the study and researchers from the Paris Observatory and the University of Grenoble, France. ®