A massive exoplanet some 25 light years away may be nothing of the sort, astroboffins now believe – which isn't surprising seeing as it just vanished.

In 2008, after four years of observations using the Hubble Space Telescope, scientists announced the discovery of Fomalhaut b. Yet by 2014, the object had all but disappeared. Experts were left scratching their heads over the fate of Fomalhaut b, which appeared to orbit a bright star not too far from Earth. If it really is or was an exoplanet, where did it go? If it’s not an exoplanet, what was it?

Now, a pair of academics at the University of Arizona in the US believe they have cracked it. Fomalhaut b isn’t an exoplanet after all, according to their paper published in the Proceeding of the National Academy of Sciences on Monday. Instead, it’s actually a giant cloud of dust left over from the collision of two planetesimals that dispersed over time.

"Our study, which analyzed all available archival Hubble data on Fomalhaut revealed several characteristics that together paint a picture that the planet-sized object may never have existed in the first place," said András Gáspár, an assistant astronomer at the uni's Steward Observatory. ”Clearly, Fomalhaut b was doing things a bona fide planet should not be doing.” 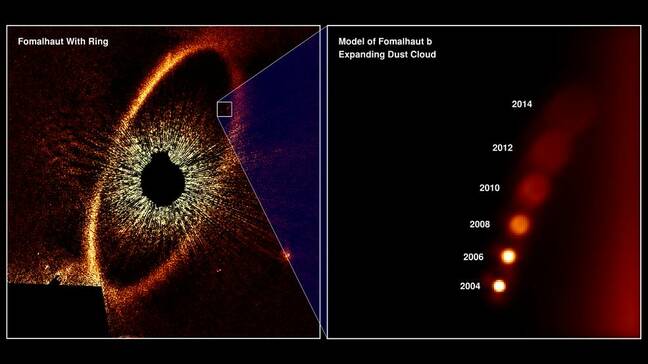 Fomalhaut b disappearing over time in this model derived from Hubble data ... Image Credit: NASA, ESA, and A. Gáspár and G. Rieke (University of Arizona)

The vanishing trick left scientists baffled. Although the object was incredibly bright, it didn’t seem to emit any heat. All the planets in our Solar System, for example, emit infrared energies as they reflect the Sun’s radiation.

Fomalhaut b’s orbit was also odd and very eccentric. Nevertheless, back in 2008, astronomers were convinced it was a giant exoplanet about three times the mass of Jupiter; it appeared as a visible moving dot in images snapped by NASA’s Hubble scope. Fomalhaut b then began dimming, and by 2014 the telescope could no longer detect it.

The latest assessment reveals the object’s orbit isn’t elliptical; Fomalhaut b isn’t orbiting its host star – it’s actually on a path that will eventually lead it away from its star.

"A recently created massive dust cloud, experiencing considerable radiative forces from the central star Fomalhaut, would be placed on such a trajectory," said Gáspár. "Our model is naturally able to explain all independent observable parameters of the system: its expansion rate, its fading and its trajectory."

They believe Fomalhaut b was created after two objects about 125 miles (200 km) across smashed into one another not too long before it was first observed by Hubble in 2004.

“These collisions are exceedingly rare and so this is a big deal that we actually get to see one We believe that we were at the right place at the right time to have witnessed such an unlikely event with NASA's Hubble Space Telescope," said Gáspár.

"The Fomalhaut system is the ultimate test lab for all of our ideas about how exoplanets and star systems evolve,” George Rieke, co-author of the study and a professor of astronomy at the University of Arizona. "We do have evidence of such collisions in other systems, but none of this magnitude has been observed in our solar system. This is a blueprint of how planets destroy each other."

The pair hope to study the planetary system in more detail with NASA’s James Webb Space Telescope due to launch next year. They want to get a better look at the dusty asteroid belt, and to search for any real exoplanets orbiting the star. ®