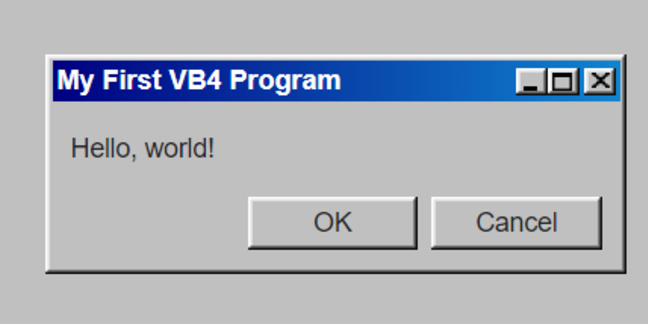 From the department of Just Because You Could Doesn't Mean You Should comes the arrival of a CSS library to transport your HTML pages back to the world of Windows 98.

While retro websites are all well and good, replete with banners and whiffy HTML, software engineer Jordan Scales found himself with a bit of time on his hands and did the logical thing: recreate a bunch of Windows 98 controls in CSS form.

The library, which does not contain any JavaScript, renders vanilla HTML with a Windows 98 feel, including buttons, checkboxes and option buttons that follow Microsoft's elderly Windows User Experience guidelines.

Naturally, everything is the appropriate shade of battleship grey with a 3D effect bound to bring a tinge of nostalgia for those tired of the Microsoft's recent obsession with making things flat or shoving the Fluent Design stick where it probably doesn't belong.

Other attempts to catapult users back to the halcyon days of Windows 98 have been attempted before, but have often required more than just CSS.

The suite also handles disabled components, group boxes, dropdowns and faux Windows, complete with the graduated title bar beloved by those that kept the Classic theme running for as long as they could. A treeview is also available, with an example placing the text "Avoid at all costs" as a child of the "JavaScript" entry.

Lord please forgive me for what I'm about to do pic.twitter.com/ag4KWkX6PT

We spent possibly a little more time than we should having fun making HTML pages suddenly resemble the world of more than 20 years ago before talking to Scales and asking, well, why?

"Part nostalgia and part frustration with modern design," he replied, "I grew up with Windows 98, and when I see those chiselled buttons (and click them) my heart races – it's just so wonderful."

Scales had kicked off a project to recreate Windows 98-style buttons a couple of years ago but, finding himself with a little more free time on his hands in recent weeks, the New Jersey resident decided to breathe new life into the design paradigms of Windows 98. A frustration with some of the excesses of modern design also helped, as he explained:

Buttons just don't look like buttons anymore, it's so sad. Like I watch my mom on her iPhone not knowing to tap things because they just look like text. But Windows 98? It's a goddamn piece of elevated stone staring at you. It's wonderful.

Scales is pondering recreating Tab views and NavMenus next after taking a well-earned rest and fixing some bugs.

The code is available on GitHub and Scales is keen to see the odd pull request or two. Sadly, this hack's CSS skills stop at swearing loudly at a web page when an entire section of text is mysteriously thrown off the screen after an innocuous setting is changed elsewhere.

But if there is a particular bit of Windows 98 UI design that needs to come back in 2020, then the repo awaits your contribution. ®

Rose-tinted spectacles ON. Nope, not doing anything

How can you kill that which will not die? Windows XP is back (sorta... OK, not really)

Usage up 0.08% while Windows 10 continues to win converts

All good, leave it with you...? Chap is roped into tech support role for clueless customer

On Call 'He was definitely invoiced'

The Vulture picks over the remnants of January to June