Light-propelled nanocardboard robots laden with sensors, flitting in the Martian atmosphere, could one day help us better understand the Red Planet.

Wait, nanocardboard, you ask? Yup. In this instance, this novel material is made of aluminum oxide tubes arranged in an alternating basket-weave pattern to form a hollow plate just 50nm thick. Outside gasses can pass through the tubes, and when light shines on one side of the nanocardboard, it creates a temperature difference that causes the gas to make it lift off.

This particular design was produced by an engineering team at the University of Pennsylvania; other approaches, inspired by corrugated paper cardboard, were previously put forward. 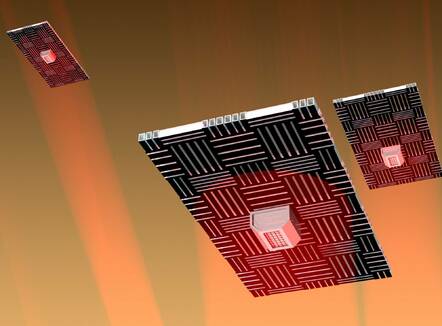 “The air current through these micro-channels is caused by a classical phenomenon called thermal creep, which is a rarefied gas flow due to the temperature gradient along the channel wall,” Howard Hu, co-author of a paper published in Advanced Materials describing the material, said this week.

Hu, a mechanical engineering professor at the American university, and his colleagues envision a fleet of nanocardboard robots flitting around Mars, propelled by just the Sun's rays and the Red Planet's thin atmosphere. It helps that the unforgiving dust world's gravity is roughly a third of Earth's.

“The levitation mechanism works best at pressures between 1 and 1000 Pascals,” Igor Bargatin, lead author of the study and an associate professor of mechanical engineering at the university, told The Register. “Mars has an atmospheric pressure is about 600 Pascals on average, which is within the sweet spot of photophoretic levitation.”

They estimate that these minuscule flecks of material could carry payloads up to ten times their weight. Each nanocardboard plate weighs just a third of a milligram, though, so whatever it transports has to be incredibly light.

However, if they could be packed with tiny chemical sensors, they could help scientists probe for possible signs of life. “On Mars, looking for water or methane would be very interesting. Water is probably necessary for life on Mars and methane may be produced by life,” Bargatin added.

Although the nanoscale material seems promising, prototype samples of the nanocardboard bots rose only about a centimetre off ground, and have only carried mock payloads made out of silicone rings, in lab experiments. However, this effort is still in its research phase: there's more work to be done.

“We need to optimize the lift force and payload first," Bargatin said. "After that, we need to work on stability and control issues, for example, how do you get the microflyer exactly where you want it to go despite the wind gusts and other perturbations?”

Still, the boffins can dream. They hope that their nanocardboard material could one day be used in space exploration. Deploying numerous tiny robots has advantages over heavy, complex machinery, such as NASA's helicopter-like Martian drone, Bargatin reckoned.

“The Mars Helicopter is very exciting, but it’s still a single, complicated machine," he said. "If anything goes wrong, your experiment is over, since there’s no way of fixing it. We’re proposing an entirely different approach that doesn’t put all of your eggs in one basket.” ®