Geoboffins reckon extreme rainfall might help some volcanoes pop off 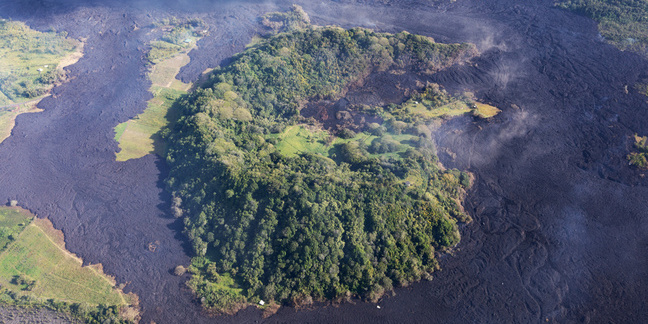 Aerial view of lava flows from the eruption of Kīlauea in Hawaii, May 2018

For those of us who spent no small part of our childhoods avoiding certain bits of carpet because they were lava, boffins reckon they might have an idea why volcanoes erupt in the first place.

Esteemed science journal Nature has published a paper saying that, to everyone's surprise, extreme rainfall may be a significant contributing factor to hot molten rock spewing from the bowels of the Earth.

Although rainfall is known to trigger seismic events and can alter volcanic activity, researchers have until now only observed the phenomenon in the shallow subsurface of the volcano, and it is unknown whether rainfall can activate deep magma movement.

From May to August 2018, rifts opened around Kīlauea volcano in Hawaii and the summit exhibited explosive eruptions and caldera collapse. The trigger has been unknown.

Jamie Farquharson, of the University of Miami, and Falk Amelung, of the University of California Berkeley, looked at rainfall leading up to the eruption and found several months of anomalously high precipitation. Hawaii's volcanic rocks are permeable, allowing water to infiltrate and pressure changes to occur several kilometres below the surface, close to where the magma resides.

The researchers found that the water then penetrated the volcano's subsurface, increasing the pressure to the highest level in nearly 50 years immediately before the thing went off.

The idea is that the pressurised water weakened the volcano's structure and allowed in the magma, leading to the riotous eruption.

A further statistical analysis of past eruptions of the same volcano found that from 1790 onwards, nearly 60 per cent of eruptions occurred in the rainy season, even though it is shorter than the dry season. Perhaps, then, there is a correlation between rainfall and Kīlauea's eruptions throughout history.

In an accompanying article, Michael Manga, professor at the Department of Earth and Planetary Science, University of California, Berkeley, said: "Should we increase alert levels at volcanoes after heavy rainfall? We could ask the same question about other stress changes, such as those from regional earthquakes. This is an open question.

One tool to rule them all

Hawaii governor: I wanted to tell everyone nuke alert was fake – I just forgot my password

Sun, sea and solutions on the Pacific island for the Best of Big Bluers

FYI: That Hawaii missile alert was no UI blunder. Someone really thought the islands were toast

False text probe reveals screw up after screw up

Missed the ax? Then don’t miss the flight