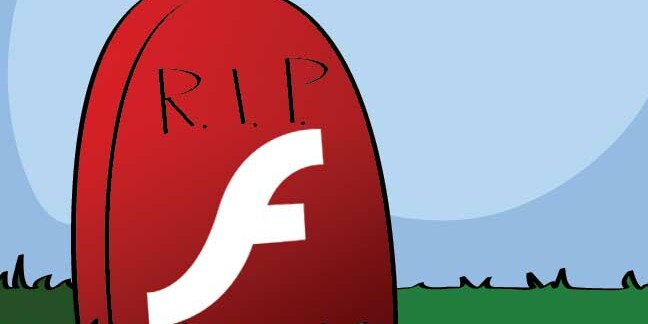 LibreOffice has joined the rest of the industry to hammer another nail in the coffin of Adobe's Flash technology with the removal of an export filter from the suite.

Noted by Phoronix, the death knell of the tech that, frankly, most had forgotten was even there in the first place was noted not with fireworks but with a terse commit stating that with Adobe retiring the tech by the end of 2020, there was little point in keeping the functionality to export to .SWF in the project anymore.

A look at the LibreOffice timeline shows the technology dates back to 2003, with OpenOffice.org 1.1 boasting the ability to export presentations to Flash as well as a one-click export to PDF. A fork of the code brought forth LibreOffice in 2010. Version 7.0.0 is scheduled for early August.

The change has lightened the source by a good few thousand lines, and comes after Adobe's 2017 confirmation that Flash was for the chop. Microsoft, Google and Mozilla are in the process of removing the multimedia tech - and its Swiss-cheese tendencies - from their browsers and Adobe will be pulling down the blinds for the last time by the end of 2020.

As well as the removal of the .SWF filter, LibreOffice 7 should see the DOCX filter save in 2013/2016/2019 mode instead of 2007 compatibility mode, not ideal for those working with users running older versions of Word, but as the current draft release notes state: "Word 2010 users should upgrade to LibreOffice."

Other improvements documented in the current release notes are performance jumps throughout the suite, UI tweaks, and the replacement of the Cairo library by the Skia library in the core project for the rendering of text. The Skia graphics library can also be found in Google Chrome.

It has been a long time coming, but the end of the road for Flash is nearing. ®