Astronomers have discovered a new population of foreign asteroids that have been quietly orbiting the Sun on the outskirts of our Solar System.

These 19 space rocks have been right under our noses the entire time, almost since the Solar System formed some 4.5 billion years ago. But they were hidden amongst all the other objects part of a group known as the Centaurs, according to a research paper published in the Monthly Notices of the Royal Astronomical Society on Thursday.

Centaurs describe small bodies, mostly with unstable orbits, that orbit the Sun faraway, near the outer planets. They can be difficult to detect due to their small sizes; scientists estimate that there may be somewhere between 44,000 to more than 10,000,000 of these objects. A tiny proportion of asteroids in the group, however, are unlike all the others.

"We examined 17 multiple-opposition high-inclination Centaurs and the two polar trans-neptunian objects 2008 KV42 and (471325) 2011 KT19," the paper's abstract read. "The statistical distributions show that their orbits were nearly polar 4.5 Gyr in the past, and were located in the scattered disc and inner Oort cloud regions."

In short, these 19 asteroids have very odd orbits. When traced back in time they would have been circling the Sun at inclinations of nearly 90 degrees compared to the flat disk that the planets formed in.

The explanation for their existence is that they must have been captured from another nearby star when the Sun was forming, the researchers from the Observatoire de la Côte d'Azur, France, and São Paulo State University, Brazil, suggested.

“The close proximity of the stars meant that they felt each others’ gravity much more strongly in those early days than they do today,” said Fathi Namouni, lead author of the study. “This enabled asteroids to be pulled from one star system to another.”

The researchers built simulations of the incomers' orbits by taking into account their properties described in existing datasets. Their sizes range from 10km (6.3 miles) to 300km (186 miles across) in diameter.

“The discovery of a whole population of asteroids of interstellar origin is an important step in understanding the physical and chemical similarities and differences between Solar System-born and interstellar asteroids,” said co-author Maria Morais.

“This population will give us clues about the Sun’s early birth cluster, how interstellar asteroid capture occurred, and the role that interstellar matter had in chemically enriching the Solar System and shaping its evolution.”

An asteroid heading to Earth looks like it's, erm, wearing a mask

Here’s another asteroid oddity to marvel at: Astronomers at the Arecibo Observatory in Puerto Rico operated by the University of Central Florida are tracking asteroid 1998 OR2 approaching Earth.

A doppler radar scan of the asteroid on April 17 showed the outer edge of the object looks rounded, with a dimple in the center. In these times of coronavirus concern, someone thought it looked a bit like a mask and put out a press release. 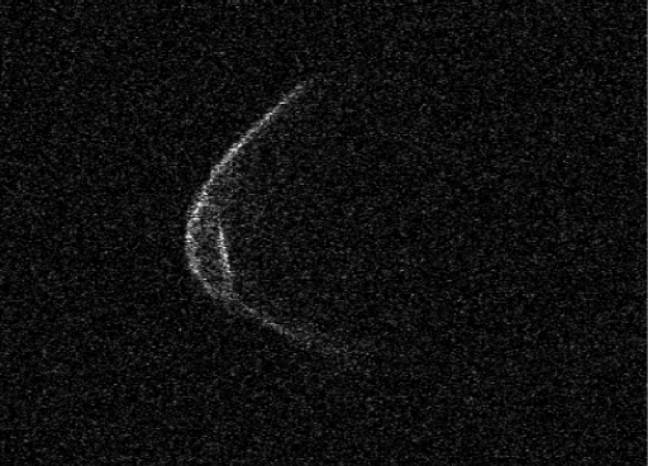 “The small-scale topographic features such as hills and ridges on one end of asteroid 1998 OR2 are fascinating scientifically,” said Anne Virkki, head of Planetary Radar at the observatory. “But since we are all thinking about COVID-19 these features make it look like 1998 OR2 remembered to wear a mask.”

Don’t worry, the asteroid will also be abiding by social distancing rules and will come no closer than 16 times the distance between the Earth and the Moon on April 29, then head off around the Sun again. ®