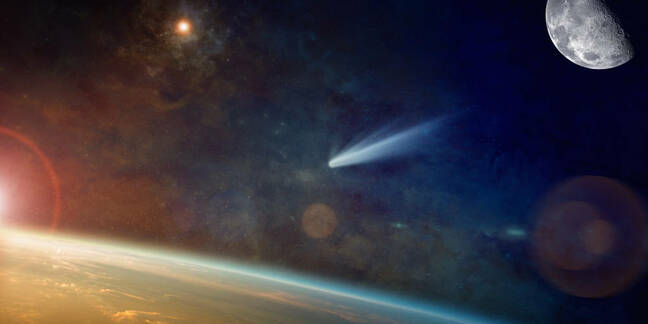 Vid The interstellar comet 2I/Borisov shed nearly 230 million litres of water as it whizzed through our Solar System during its visit last year, according to measurements gathered by NASA’s Neil Gehrels Swift Observatory.

The clumpy ice rock is best known for being the first alien comet, as opposed to the interstellar asteroid Oumuamua, to venture into our Solar System. As it approached the Sun, the warmth from its rays vaporized the frozen material on the comet’s surface.

A team of astronomers followed Borisov’s journey and paid close attention when it arrived within roughly 200 million miles of the Sun. At that distance, the water locked up in its ice converted into gas. The outgassing contained hydroxyl molecules – made up of an oxygen atom bonded to a hydrogen atom – the generation of which emitted UV light that was detected by the Ultraviolet/Optical Telescope aboard the Swift spacecraft.

The researchers measured a 50 per cent increase of water lost by the comet as it made its closest approach to the Sun between November and December last year. They calculated that it must have lost 30 litres per second at its peak, a rate that would fill a bathtub in just ten seconds.

It is estimated to have produced nearly 230 million litres of water in total during its trip through the Solar System, an amount equivalent to 92 Olympic-sized swimming pools. Here's a video illustrating the findings:

“We’re really happy that Swift’s rapid response time and UV capabilities captured these water production rates,” said Dennis Bodewits, co-author of a study into the research published in The Astrophysical Letters and an associate professor of physics at Auburn University in the US. “For comets, we express the amount of other detected molecules as a ratio to the amount of water. It provides a very important context for other observations."

In previous research, two groups of astronomers discovered Borisov contains the highest carbon-monoxide-to-water ratio ever seen in a comet. The findings suggest that the alien visitor must have come from a much colder region in another planetary system elsewhere. Despite this, however, Zexi Xing, first author of the study and a graduate student at the University of Hong Kong, said Borisov isn’t too different from other comets belonging to our Solar System.

“Borisov doesn't fit neatly into any class of solar system comets, but it also doesn’t stand out exceptionally from them There are known comets that share at least one of its properties,” said Xing. She found that it has a similar amount of other chemicals such as carbon and amidogen, a property shared by about 25 to 30 per cent of comets.

Swift was sent to space to detect gamma-ray bursts but it also carries the right instruments to study comets too. “The team did not envision that the mission would contribute so much to our understanding of planetary science when it was being built,” said Bradley Cenko, the principal investigator on the Swift team working at NASA’s Goddard Space Flight Center.

“But it’s a nice example of people coming up with creative and powerful ways to use the capabilities that are out there to do unexpected and exciting science.” ®