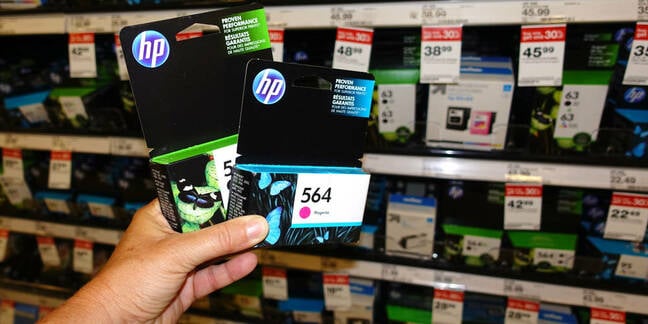 One man’s effort to sue HP Inc for preventing his printers from working and forcing him to use its own branded, and more expensive, ink cartridges can move forward in California.

Florida man John Parziale was furious when he discovered in April last year that HP had automatically updated his two printers so they would no longer accept ink cartridges from third-party vendors – cartridges he had already bought and installed.

That month, HP emitted a remote firmware update, without alerting users, that changed the communication protocol between a printer’s chipset and the electronics in its inkjet cartridges so that only HP-branded kit was accepted. The result was that Parziale's printer would no longer work with his third-party ink. He saw a series of error messages that said he needed to replace empty cartridges and that there was a “cartridge problem.”

Parziale sued the IT titan in its home state of California, arguing he would never have bought the HP printers if he knew they would only work with HP-branded ink cartridges. At the time, the cartridges he bought to go with the machine did in fact work and were printing merrily right up to the point the DRM-style update was sent.

HP asks customers to “please use genuine HP ink cartridges for best results,” though Parziale decided he would forego the “best results” to save money. He bought nine cartridges, none of which work any longer.

It’s a situation that millions of people worldwide can sympathize with: a full set of inkjet cartridges often cost over $100, making the ink more expensive per drop than vintage champagne, whereas refilled or third-party cartridges often cost a third of that – and that's a significant saving.

But feeling ripped off and beating a tech giant in court are two different things, as Parziale found out this month [PDF] when federal district judge Edward Davila threw out most of his claims against HP. Four of five allegations he had made were under America's Computer Fraud and Abuse Act (CFAA), accusing HP of abusing its “authorized access” to his devices. These were rejected because, the judge noted, he had granted HP remote access to his printer.

The one charge left, which Parziale will now need to prove, is that HP had “intentionally caused damage by altering his printers’ functionality in a way that devalued the printers.” In other words, by forcing his printers to only accept HP cartridges through the firmware update, the value of his printer had fallen.

He argued that HP had “substantially decreased the value of the products, after the point of sale, by installing permanent firmware updates onto the units that rendered the units less functional and less valuable than they were prior to that time.”

Parziale also took aim at the entire business model that HP and other printer manufacturers use to turn a profit: cheap printers and expensive ink. HP had, it was claimed, “harmed competition and raised the cost of owning printers… by forcing existing customers who have sunk a high upfront cost in a printer and now are restricted to continuing to use that printer and HP brand ink cartridges at an artificially elevated variable cost.”

In addition, Parziale alleged HP broke Florida's Deceptive and Unfair Trade Practices Act by making him believe non-HP cartridges would in fact work. But the judge argued that he hadn’t been misled because at the time he bought the printers, an OfficeJet Pro 7740s, they did in fact work with other cartridges.

HP’s support page also includes statements that non-HP cartridges may not work, and that “HP cannot guarantee the quality or reliability of non-HP cartridges,” which the judge said Parziale should have taken into account.

Judge Davila then made the somewhat extraordinary assertion that “in light of this express warning, no reasonable customer would understand HP’s statement to mean that the printer would remain compatible with non-HP cartridges.”

Parziale bought his two machines in September 2017 and June 2018, 19 and ten months before the updates borked his gear, respectively, which doesn’t sound like an unreasonable length of time to expect the printer to work as expected. The judge said he could revisit this claim in an amended complaint – he should take a look at what happened when the exact same thing that happened with HP in Australia in 2018.

Just think of the experience

HP has a wide range of explanations for why it continues to push updates that knacker competitors’ cartridges, including to “protect the quality of the customer experience, maintain the integrity of our printing systems, and protect our intellectual property.” The judge was careful to note these are “alleged benefits,” though said Parziale had failed “to allege that his injury outweighs any countervailing benefit to consumers."

What are those benefits? Well, HP has argued it spends a billion dollars a year on “ink research and development,” and that the ink “must be formulated to withstand heating to 300 degrees, vaporization, and being squirted at 30 miles per hour, at a rate of 36,000 drops per second, through a nozzle one third the size of a human hair. After all that it must dry almost instantly on the paper.”

Which is very impressive. Except that quote came from Thom Brown, a marketing manager at HP, in an opinion article that is now a decade old, 2010 in fact, when HP was facing the exact same consumer fury over prices. Can HP ink now withstand 400 degrees? Or be squirted at 60 miles per hour? Is the rate now 63,000 drops per second?

At some point, HP's boasts of constant innovation have to be checked against reality. Although, because the judge dismissed Parziale's claim, HP is unlikely to be scrutinized on this point in this particular lawsuit.

As to what Florida Printer Man did manage to successfully argue he could challenge HP on: he said he was at risk of harm from another firmware update that may suddenly and unexpectedly impact another part of his printer, and the judge accepted that as an argument and acknowledged, in that case, he would be allowed to request an injunction.

And as mentioned above, the judge also, crucially, accepted the fact his cartridges suddenly stopped working could be seen as “damage” to his printers.

Of course, none of this will come as news to anyone that regularly purchases printers. HP in particular has been playing this game for years, with periodic aggressive intervention followed by backing off when people complain and sue it.

In March 2016 and September 2017, HP did the exact same thing, pushing out updates that changed the communication protocol between cartridges and printers to break third-party cartridges. The EFF got involved, and a class-action lawsuit was launched that reached the same point where Parziale’s is now: allowed to move forward but with some claims pulled out.

What happened? HP settled. And it agreed not to install its “dynamic security” in future, but only on those models that were a part of the lawsuit. It continued to push its DRM-like updates to its other printers. Newer printers were not included. Printers like the OfficeJet Pro 7740. ®