Linux distro giant gets cosy with Microsoft among other announcements

Red Hat Summit The Red Hat (virtual) Summit is under way, and the Linux distro giant has announced the release of OpenShift 4.4, new deals with Microsoft, and the unboxing of Fedora 32.

IBM president Jim Whitehurst opened Tuesday's online event with a promise that Red Hat would remain "independent" within Big Blue. The reason, he said, is "to ensure that Red Hat can work with IBM's competitors," in order to preserve the role of Red Hat within the open-source ecosystem.

There are fewer announcements than usual for a Red Hat Summit due to the COVID-19 pandemic, which forced the event to take place online, said CEO Paul Cormier. The software biz has also announced some initiatives aimed at customers struggling during the virus outbreak, including extended life-cycles for some products and free online training.

There were still a fair number of product launches, many of them centered on OpenShift. Version 4.4 includes the HAProxy 2.0 load balancer for better performance, improved storage management with volume re-size, snapshot and clone, and includes OpenShift Serverless for function-based, event-driven applications.

Also in technical preview now is OpenShift Pipelines, a DevOps pipeline based on the Tekton project, and OpenShift virtualization, based on KubeVirt, to support VMs as well as containers.

Microsoft was along to share the love as Red Hat, and the Windows goliath announced the general availability of Azure Red Hat OpenShift on OpenShift 4. It is a fully managed service (no patching required) and adds the cluster-admin role which, we're told, enables features such as privileged containers and installing Custom Resource Definitions. 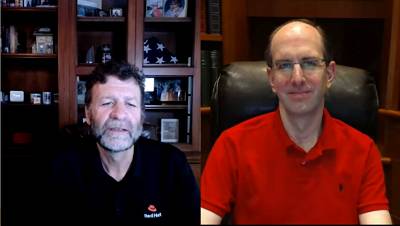 Microsoft has also confirmed it is extending its Azure Arc preview, which lets you manage on-premises systems from Azure, to add specific support for Red Hat Enterprise Linux (RHEL) servers and OpenShift clusters.

New features are coming to Arc, Redmond said, to support SQL Server on RHEL, as well as reporting on expiring certificates and managing disk encryption.

“[Arc] enables a host of new scenarios, not only for infrastructure, but also moving up the stack and including Azure data services like our SQL database service and our PostgreSQL database service, which through Azure Arc we’re going to enable you to deploy anywhere,” said Scott Guthrie, Executive VP Microsoft Cloud + AI, at the summit.

The idea is that Azure becomes a management tool for IT resources in multiple locations. SQL Server is now available on OpenShift, and there is also integration with GitHub so that “applications defined in GitHub repositories can be automatically deployed via Azure Policy and Azure Arc to any repo-linked OpenShift cluster,” according to the announcement.

Why is Red Hat cosy with Microsoft? Both corporations are invested in hybrid cloud, though it may be that the Azure titan is a more comfortable partner for Red Hat, compared to AWS, which likes its own Linux as well as having a deep partnership with hybrid rival VMware.

Red Hat Ansible Automation Platform, which combines hosted services with Ansible automation, has new features including an automation services catalog, for both infrastructure and application deployments, scheduled to be available “early this summer.” Red Hat also announced planned enhancements to analytics in the platform, to include additional stats and improved filtering.

Fedora 32 Linux is now generally available. This release, in the Workstation edition, includes EarlyOOM, which automatically terminates the process that uses the most memory if available memory goes below 10 per cent.

That's not great, but the idea is to avoid leaving it to the kernel's out-of-memory handler, which can drop caches and kill processes based on a heuristic that may seem random to users. The operating system also bundles a “Computational Neuroscience Lab image to help encourage the use of free and open source software in scientific work.” The desktop has been upgraded to GNOME 3.36. ®