You know what, Lars? We're OK 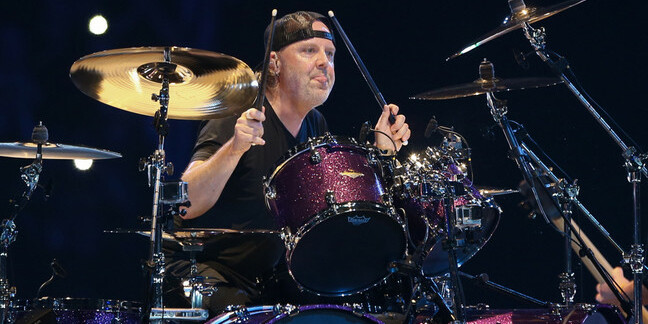 Lars Ulrich, drummer of corporate shlock rock merchants Metallica, has threatened that the thrash metal giants could make a new album despite the coronavirus lockdown as he wagged chins with Salesforce chief Marc Benioff.

To that some of us would say: "Haven't we suffered enough?"

During a live webcast on Tuesday by the enterprise SaaS outfit about "connecting with your customers fans from home", Ulrich told apparent best buddy Benioff that the upside of the pandemic was technology finding new ways of bringing folks together.

After an intro of congratulatory back-slapping, the pair mourned the human cost of COVID-19 then spitballed about how tech is keeping the wheels of big biz – including one like Metallica – turning during these torrid times.

Musing on how to make music during "the new normal", however, the conversation took a dark turn. Ulrich warned: "The people that make the software and all the stuff that we use to record are sitting right now trying to figure out how Lars and James [Hetfield] and Kirk [Hammett] and Rob [Trujillo] can make a Metallica record from four different locations in four different states. That's obviously something that we're very excited about."

As if Ulrich's timing wasn't dodgy enough, we can imagine how poor it might sound once Metallica starts jamming over Zoom.

At this, superfan Benioff excitedly interjected: "Is that gonna happen? Are we gonna see a new Metallica album appear from your homes?!"

Ulrich wouldn't give an outright "yes", but was worryingly receptive to the suggestion. He responded: "A lot of that will do with how long the stay-at-home orders are in place and a lot of that will have to do with if there's a second wave of the virus. Who knows what our world will look like six months from now? But obviously, the one thing that you can depend on with creative people, for better or worse, is that they can't sit still for very long and I can tell you that on one of these weekly Metallica Zoom sessions we are talking about how we can just be a band again."

After rambling a bit more, he added: "I can tell you that all four of us are really excited about what that could look like. Will there be a Metallica quarantine record? I can't tell you because, again, I don't know how long the quarantine will last, but if you and I and the rest of the world are still sitting here six months or a year from now, I can say there's a very good chance."

Great. Of course, about 300 years ago, during the '80s, Metallica was among a clutch of influential bands that took the New Wave of British Heavy Metal sound, injected it with Motörhead and hardcore punk, and sped it up to a breakneck pace, popularising "thrash metal" and laying the foundations for more extreme forms like death metal and black metal.

They unleashed a salvo of landmark albums during that time – Kill 'em All, Ride The Lightning, Master of Puppets, and ...And Justice For All – up until 1991, when they realised they could make even more money if they wrote pop-rock songs and power ballads. That was the eponymous "black album".

Then they cut their hair. And the less said about that period, right up to 2016's Hardwired... to Self-Destruct, the better.

But if we take a moment to stop cyber-bullying Metallica, there was a warm and cuddly side to the sellout sesh. Salesforce said it would be matching donations up to $100,000 to the band's charity limb, All Within My Hands, which has been giving grants to COVID-19 relief orgs.

Benioff has also spearheaded $5m in grants to small US businesses negatively affected by the lockdown. It should be said, however, that with each individual grant worth $10,000, that just about covers two weeks of revenue at the low end. Two days at the high end.

Though there were pained expressions and confessions of "heartbreak" during the presentation, we mustn't forget that the theatrics and charitable gestures are still ultimately about one thing: making as much money as possible even while the world groans under the weight of the pandemic. You can be sure that Ulrich, too, will be patting a fat cheque as thanks for his appearance.

It's not his first time rubbing shoulders with tech high society. Erstwhile Intel CEO Brian Krzanich once shared fond memories of dining at Benioff's house in the company of Ulrich, Elon Musk and David Blaine, of all people.

Metallica as a whole is also "powered" by Salesforce Marketing Cloud and Salesforce Commerce Cloud, and was even roped in to play the company's Dreamforce event in 2018, where Ulrich was quoted as saying Metallica had spent that year "trying to apply Salesforce products into everything that Metallica does".

Former Metallica bassist Cliff Burton – peace be upon him – would never have let this happen.

You can watch Salesforce's stream here if you, too, are hardwired to self-destruct. Ulrich's terrifying prophesies can be found around the 31-minute mark. ®