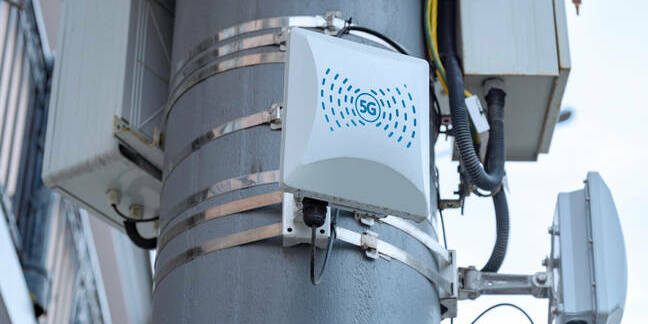 Comment This is one of those that should fall under the title of unlikely things to awaken Brits' patriotic spirit: a gaggle of anti-5G protestors in the UK's capital.

Yes, the people who gathered in London, against expert medical advice, this past weekend, are idiots. You don't have to remind us of that. They earnestly believe the COVID-19 pandemic isn't a real thing. Those people hooked up to ventilators don't have a disease but are merely suffering the effects of radiation poisoning. We don't need a lockdown, they insist, but rather to tear down the handful of 5G towers that have cropped up in most major UK cities.

"I think we will be living in a far worse, dystopian version of Nazi Germany," said one protestor in Parliament Square, who apparently thought the Third Reich was some kind of egalitarian wonderland.

"This virus has never been proven to exist," shouted another, who presumably missed the invention of the electron microscope.

Again, yes, they're idiots. But if you look past the chins awash with spittle, you'll perhaps notice something: it all seemed rather civil. Just a few miles away, near London's Scotland Yard police HQ, a separate anti-lockdown/anti-5G/anti-vaccines group ended their protest with a group hug.

Compare that to the behaviour exhibited by our cousins on the other side of the Atlantic, becoming rather quite upset over not being able to get a haircut, and showing up to state legislatures with more firearms than an ISIS sleeper cell.

On the subject of home-grown fruitcakes in the news this past weekend, there's also David Icke: the one-time BBC sports presenter turned shellsuit-wearing conspiracy theorist.

Icke has all sorts of funny ideas. He believes the Royal Family (as well as the Rothschilds and the Bush dynasty) are actually shapeshifting lizards, from the Alpha Draconis star system, called Archons. In the early 1990s, he claimed he was the son of God (or more accurately, "Godhead".) Oh, and obviously, he thinks the terrorist attacks of September 11, 2001 were orchestrated by the illuminati.

All of this is very, very silly, but not sufficiently bonkers for YouTube to take action. But that changed when Icke linked the COVID-19 coronavirus to 5G radio transmissions, and questioned whether the disease could be spread by physical contact.

That spurred YouTube into action, with the site deleting the conspiracy theorist's page. Speaking to the BBC, Google's video arm said: "YouTube has clear policies prohibiting any content that disputes the existence and transmission of COVID-19 as described by the WHO and the NHS."

"Due to continued violation of these policies we have terminated David Icke's YouTube channel."

This comes just days after Facebook deleted Icke's page, which had 770,000 fans, for the same reason. At the time of writing, his Twitter page remains active, where he has over 300k followers.

As Brit judge finds him guilty of breaching his bail conditions

New MeX-Files: The curious case of an evacuated US solar lab, the FBI – and bananas conspiracy theories

Of course, it's huge sun flares, Chinese spying, or ALIENS