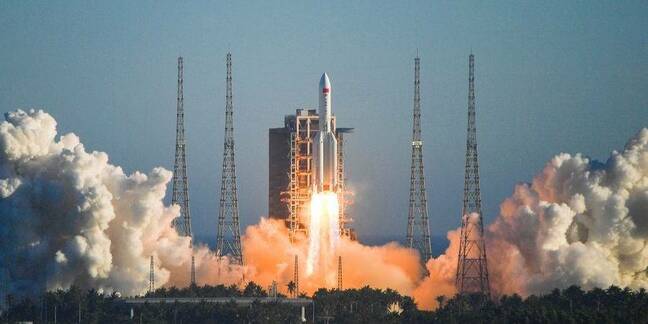 The Long March 5B launching on May 5th

China has successfully launched a prototype of its next-generation spacecraft.

The unmanned craft launched yesterday afternoon from a testing site in Wengchang on the country's southernmost tip. A capsule prototype detached from the rocket eight minutes after take off and was sent into orbit.

The craft used a modified version of China’s most powerful rocket, the Long March 5b, which has a low-Earth orbit payload capacity of 25 tonnes. By comparison, that is about a third of the 63.8 tonnes SpaceX's Falcon Heavy can handle, and a sixth of NASA's Space Launcher System, which can carry 130 tonnes.

But 25 tonnes is enough to hoist a space station module and that's what China wants to do by 2022. In 2011 the US banned China from the ISS due to national security concerns and Beijing has wanted its own space outpost ever since.

The prototype capsule launched today is designed to complete missions with three astronauts and up to 500kgs of cargo aboard, according to state-run outlet Xinhua. The capsule is capable of reaching the Moon, another Chinese ambition.

The successful launch of the Long March 5b comes after a slate of failures in recent years. In 2017, an oxygen supply fault caused the failure of the rocket's second launch, leading to years-long delays in many of China's spaceflight missions. In April and March, two other types of rockets failed to deploy their payloads.

Later this year China intends to use the Long March 5 rocket to launch its Tianwen-1 mission, which will send a lander and a rover to Mars. The rocket will also be used to launch the country's next mission to the Moon, called Chang'e 5, which will attempt to return a sample of lunar material back to Earth. ®