Happy 1.0 to the fruits of volunteer labour 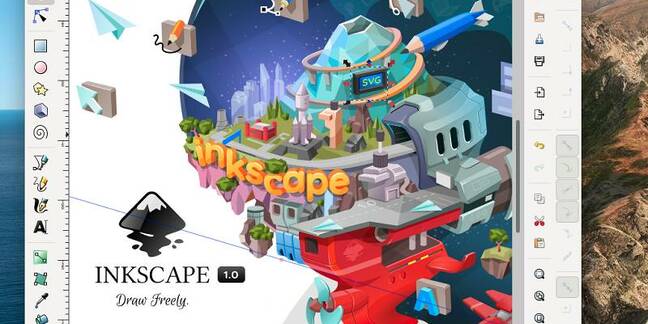 Open-source, cross-platform vector drawing package Inkscape has reached its version 1.0 milestone after many years of development.

Inkscape can be seen as an alternative to commercial products such as Adobe Illustrator or Serif Affinity Designer – though unlike Inkscape, neither of those run on Linux. The native format of Inkscape is SVG (Scalable Vector Graphics), the web standard.

We took a look at the release candidate last month. The release has been three years in the making, and comes more than 16 years after the first tentative release in 2003. A member of the development team, Marc Jeanmougin, told us that the long development time was because "it's just volunteer work", combined with technical challenges related to the migration from GNOME's GTK+ library 2 to GTK 3.

Many improvements, including HiDPI support, come as part of this transition. The team has also worked on performance, especially on complex SVG objects that have a large number of nodes.

Inkscape 1.0 is most significant for Mac users. Previous releases for macOS required a compatibility component called XQuartz, which enables applications designed for the X windowing system to run on macOS Quartz, part of Apple's Core Graphics framework. This is no longer required and Inkscape 1.0 is now a native macOS application – though it is not all good news. The announcement noted: "This latest version is labelled as 'preview', which means that additional improvements are scheduled for the next versions."

There are numerous new features, including a Trace Bitmap dialog that lets you convert bitmap images into vector drawings. There are many new or improved Live Path Effects, which apply transformations to existing drawing objects, and the user interface for this is updated, with a search option and the ability to mark specific effects as favourites.

In freestyle drawings you can mirror and rotate the canvas. Pen support is improved with pressure-sensitive effects. Some new features are aimed at those making technical drawings, including grid alignment, path length indicators, a tool to measure segments, and a Fillet/Chamfer tool for precise corner rounding.

Other highlights include new palettes and gradients, alignment tools, simplified line height settings, and templates for different screen sizes. A powerful feature called variable font support lets you manipulate font properties with sliding scales, according to what is supported by that specific font. Flowed text now works when rendered in a web browser, which in previous Inkscape versions "was not compatible with browsers, and rendered as 'black boxes' or was just missing", the docs stated.

There is a detailed look at the specifications and new features here.

The Inkscape extension API has changed and now supports Python 3, which is just as well. The updates mean that most existing extensions have to be updated to work with the new version.

"Not all third-party extensions have been brought forward to be compatible yet," the team said, so this will be an issue for those upgrading.

Inkscape 1.0 seems polished and professional. Adobe, which sells Illustrator on a subscription basis starting at £19 (if you inhale the rest of the Creative Cloud), will likely not be worried, but apart from the cost saving there are advantages in simpler applications that are relatively lightweight and easy to learn, as well as running well on Linux. ®