Video Close-up footage of asteroid Ryugu, taken by the Hayabusa 2 spacecraft as it touched down to retrieve a sample, reveals the near-Earth object’s surface may have been torched by the Sun as its orbit changed over time.

Ryugu, shaped like a spinning-top, circles our star once every 16 months and hangs out between Earth and Mars. Its orbit may not have been so stable in the past, though, according to this here study published today in Science. Images show strips of its surface appeared redder than other sections, suggesting those areas were once exposed to solar heating or space weathering.

"We suggest that a surface reddening event within a short period of time could be explained if Ryugu underwent a temporary orbital excursion near the Sun, causing higher surface heating,” noted the large international team of boffins, led by the University of Tokyo, who worked on the study.

It appears the asteroid should be blue-tinged overall, however, the solar heating and space weathering turned it red – apart from its poles, which received less heating and stayed blue. The academics believe that over time, a constant bombardment by space debris caused the red surface material to mix with the blue stuff underneath to form colored bands across the rock, as illustrated below: 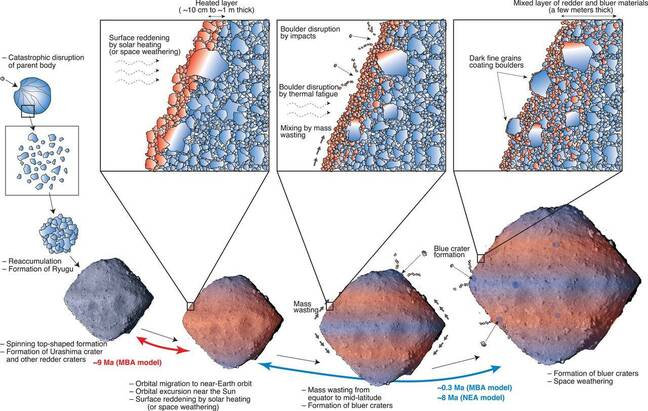 The eggheads also emitted a high-def video of Hayabusa 2 descending on Ryugu last year: the probe touched down on the surface, "sampling horn" first, and fired a small bullet-like projectile to kick up some dust. That material was collected by the horn, and will be returned to Earth. We've shared a slightly lower-res version here:

Launched in 2014, Hayabusa 2 carried multiple instruments, and deployed four rovers on Ryugu when it eventually reached the cosmic boulder. It is expected to return its asteroid samples to Earth in December. Scientists expect the dust particles will be made up of a mixture of the red and blue material. They will analyze it in more detail, looking for more evidence it was scorched by the Sun.

“We predict that the returned sample will contain a mix of altered and unaltered materials, with the former recording a solar heating event,” the team concluded. ®